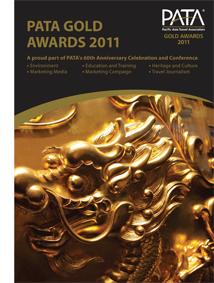 Whale Watch Kaikoura has been awarded a 2011 PATA Gold Award in the Environment Eco-Tourism category at an awards luncheon held in Beijing, China as part of the PATA (Pacific Asia Travel Association) 60th Anniversary & Conference running from the 9th – 12th April 2011.

The award recognises the outstanding contribution Whale Watch has made to the development and promotion of Kaikoura as a leading Eco-Tourism destination while acknowledging the company’s commitment to the protection of natural treasures such as the sperm whales and the environment they are so reliant on. Kauahi Ngapora, COO, Whale Watch Kaikoura said “We have the most to lose as a company and a community if we do not protect our marine mammals and the unique environment they and us call home”.

Other organisations recognised included Accor Asia Pacific, Kerala Tourism India, Tourism Australia, Thai Airways, Tourism Authority of Thailand, Ministry of Tourism India and Sri Lanka Tourism Promotion Bureau.
This is the second PATA Gold Award Whale Watch has been awarded; in 2000 the company was recognised with a Gold Award in the Heritage & Culture category. It has been a stellar few years for the company with a number of international and local awards received.

Kauahi Ngapora, COO, Whale Watch Kaikoura said. “It is always a great privilege and honour for me to represent a company such as Whale Watch. Our success is testament to hard work put in by all those that have gone before me.

"It is also very gratifying to see a company from a small town on the East Coast of New Zealand competing successfully on the international stage.

"Given recent events in Christchurch and the impact this is having on our region, it also gives us an opportunity to show the International community that Christchurch & Canterbury has got some world class products on offer, that we are definitely “Open for Business” and continue as always to give a warm welcome to all visitors”.