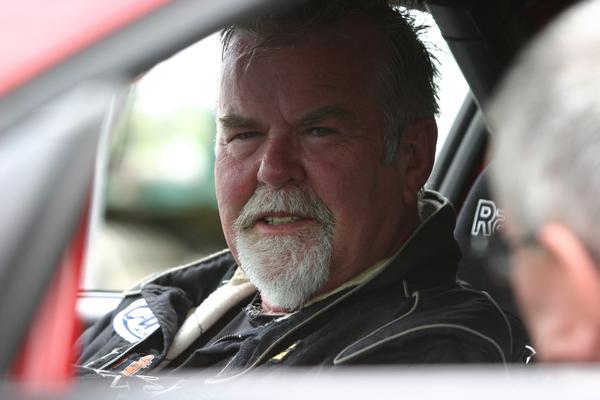 Some Would Call it Insanity

Local boy Mark Joblin has taken advantage of a last minute opportunity to test the waters of the ENZED V8 Ute Challenge when this weekend he dives head first into the series final at the country's largest and most popular motorsport event the ITM 400 in Hamilton.

The courageous Hamilton businessman hs chosen his entering the series amidst what is expected to be the hottest battle for a V8 title since the start of the series as Whangarei's Caine Lobb goes head to head amongst the concrete walls of the street circuit against Palmerston North's Chris Pither for the grand prize.

These two have constantly fought over being crowned champion throughout the entire season with numerous nail biting incidents where they have exchanged lead lap after lap and have had penalties handed out for over zealous contact between the pair.

"I am aware that Hamilton sees the conclusion of the V8 ute championship and it is pretty close at the top between Caine and Chris Pither. I'm also aware that if I find myself accidentally caught up in a battle that these guys are having I may find myself in danger of being smeared all over the unforgiving concrete walls! So you can be sure that I will be keeping a constant eye on my mirrors." said Joblin.

Nevertheless it takes a brave man to get himself buckled into a two ton V8 powered Ford ute and drive amongst the field of raw aggression which is the ENZED V8 utes especially when it is all done between those unforgiving concrete safety barriers of the temporary street circuit. Not to mention the random starting order set by a marble draw followed by a reverse grid ensuring that even the most innocent of drivers can not help but get caught up in the street fight that will be the ITM 400 of Hamilton this weekend.

"I am strictly neutral over Chris & Caine as I thnk they are both fine young drivers so I am staying out of the politics. However, I have already made it known that if I get tagged I will double tag back with bells on." he says.

Joblin of course is well known in the Motorsport New Zealand Premier Championship Series as a regular driver in the NZ Production Racing series usually in his Nissan 350GT. This season however he has sat back choosing an administrative role but is a lot more than just eager to get back behind the wheel.

"I was class co-ordinator for the Production Series this season just gone and it made me realise that I am just not good as a 'watcher' and I need to be out there again."

Joblin's debut at the 'concrete canyon' of the ITM 400 in Hamilton with be in the Protecta Insurance Ford V8 Racing Ute thanks to sponsors Protecta Insurance, Waikato Signs, RK Automotive, Kings Vehicle Insurance and Classic Car Consultants Ltd.

The baptism-by-fire debut will herald the return to competitive racing for the motorsport veteran who will remain in the car (or at least what is left of it) for the start of the new season of the ENZED V8 Ute Challenge set to get underway again in November later this year.

"We are looking to get the weekend out of the way and then concentrate on setting up for a serious tilt at V8 ute racing next season. After having driven the only rear wheel drive car in NZ Production racing last season, I am looking forward to enjoying the same style of loose and slippery tail-out racing that the utes promise." says Joblin.

After a very successful day of testing at Taupo Motorsport Park Joblin was able to whip two whole seconds off his lap time after taking a few pointers from the current series leader Caine Lobb.

Rain is expected this weekend and will bring with it some very challenging moments for all drivers and extensive excitement for the punters as the V8 utes rumble around the circuit in an anger which can only be described as spooky.

The ENZED V8 Ute Challenge begins this weekend with testing at 9.00 am Friday and qualification at 1.25pm.