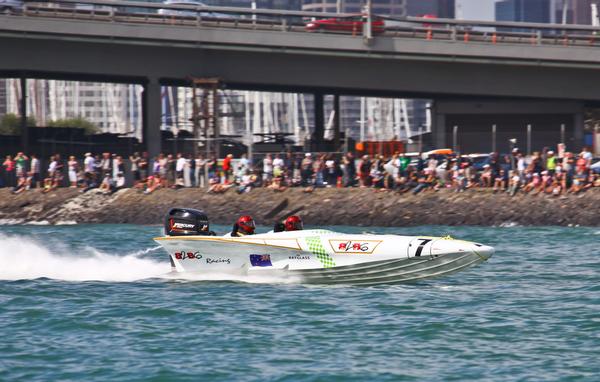 The eighth and final round of the Rayglass New Zealand Offshore Powerboat Racing Series takes place on Saturday 23rd April on Wellington Harbour. Be prepared for some action packed racing, with plenty of spray and roaring engines with boats reaching speeds in excess of 100 miles per hour. This is a fantastic race for spectators as the boats race around the foreshore of Oriental Bay, skimming Point Jerningham and turning down into Evans Bay, before racing out into the centre of the harbour.
'Schick Hydro' flying round the course at Auckland. Cathy Vercoe LuvMyBoat.com

While many of the season titles have been decided during the previous weeks of racing, this is the last chance to go all out, and with many teams having nothing to lose we could see boats and crews pushing to make the most of their last race, knowing they have plenty of time for repairs and modifications before the start of next season.

Perhaps the biggest Battle in Wellington is in the Super 60 class where there is keen competition between the two batboats, 'Espresso Engineers' raced by Mike Gerbic and Dave Vazey who currently sit on 2150 points, and 'Back2Bay6' driven by father and son team Glenn and Chris Powell on 1900 points. 'Back2Bay6' missed three races after a collision at Maraetai in which they sustained serious hull damage. Though originally thought to be out of the running for the class title, the team are now in with a chance after 'Espresso Engineers' experienced electrical problems in Auckland and gained only 75 points as a DNF, while 'Back2Bay6' won the 60 mile race picking up the 475 points given for the win. The battle for Super 60 title isn't over yet, so expect plenty of speed and spray from these two boats.

Also in the 60 mile classes 'Konica Minolta' has a clear hold of the Classic Class title after seven straight wins and this week could see them making a clean sweep for the season. This boat won several NZ Championships in the past, and once again appears unstoppable, aided by the new twin 450 Verado engines that replaced the Chevrolets it originally raced with. Both 'Topaz' and 'Gull Force 10', the other boats in this class have struggled with a variety of engine issues throughout the season, but have continued to participate in the spirit of classic racing, always finding a boat from one class or another to duel with around the course.

In the sports 60 Restricted class 'Auckland District Collections' driven by Mikey Knight also has a clear lead, winning six of the seven races held so far from Jono Hanley in Marineworkz. These two always have a great battle around the course and provide plenty of spectacle with their flying leaps.

While the season champions Mike Urquhart and James Downs in the Honda 'Auckland District Collections 2' are assured of their title, the four other Honda boats will be racing hard to bump their opponents off the podium at the end of the season. Rayglass driven by Mikey Smith and Bobby Lloyd sit on 2500 points, and should be secure in second place, though memories of last years finish in Wellington when Rayglass lost steerage and appeared to be leaping uncontrollably toward the finish will be a reminder that things can go wrong at any time. James Taylor and Shannon Thickpenny in 'Total Oil' are on 2269 points, 'CRD Automotive' driven by Colin and Corey Dunn on 1595 points. 'The Gambler' driven by Grant and Kelly Smith sustained damage at Marsden Cove and has been unable to compete in the last two races of the season finishing on 1052 points.

In the Superboats we have a clear season champion winner in 'Fairview' driven by Warren Lewis and Chris Hanley. This does not mean they will be holding back, despite Warren coming unstuck last year in Wellington, and barrel rolling his boat on the run into the harbour, fortunately completing the full 360 and ending up the right way up. At times during the season this class have put on a breathtaking display of close competitive racing and all the teams enjoy nothing better than a neck and neck battle around the course. As the season has progressed we have seen crews working hard to find extra speed, acceleration and handling, and all want to make the most of this last race and prove they have the ability to win. Both 'Schick Hydro' driven by Warren's brother Scott Lewis and Murray Tuffin, and 'Doosan' the 2010 Superboat champion driven by Carey Gleeson and Sam Fillmore have had their fair share of issues this year and both will be intent on a completing the season with a good performance.

In the Superboat Lites, 'NZ Blokes' driven by Bob Smith and Andrew "Flea" Koolen are also clear leaders in their class, refining their performance, at each race and gaining more speed. The conditions in Wellington are however more suited to 'Red Steel' driven by Tony Carson and Brook Faulkner who, like 'Barracuda Kayaks' driven by Gordon Robinson and Andrew MacBeth, have more waterline length which will be more suited to the choppy water.

Wellington always provides plenty of spectacle as the wind whips across the harbour, and the waves resound off the sea walls of Oriental and Evans Bays to make the raceway choppy and unpredictable. With a brisk Nor 'east wind of 18+ knots predicted the boats should get plenty of lift, especially as they head out of Evans Bay toward the centre of the course. The predicted swell is from the south which should mean calm water as the Seatoun headland protects the racecourse from any fetch.

The NZ Offshore Powerboat Association hold a family oriented event and are happy to talk to anyone who has questions about the boats and the way they are raced. The NZ Offshore Powerboat tents and Headquarters will be set up behind Te Papa, opposite Chaffers Marina and the old Overseas Terminal. Some of the boats will be on display both before and after the race and it's free to wander around the "pit" area, and to watch the race from the foreshore or other vantage points.

Best viewing for spectators will be from the old Overseas Terminal, along Oriental Parade, Point Jerningham (by the lighthouse) and along Evans Bay Rd.

The NZOPA would like to thank the Wellington City Council, Royal Port Nicholson Yacht Club, NZ Crane, HeliPro, and Energizer for their support in making the Wellington race possible.