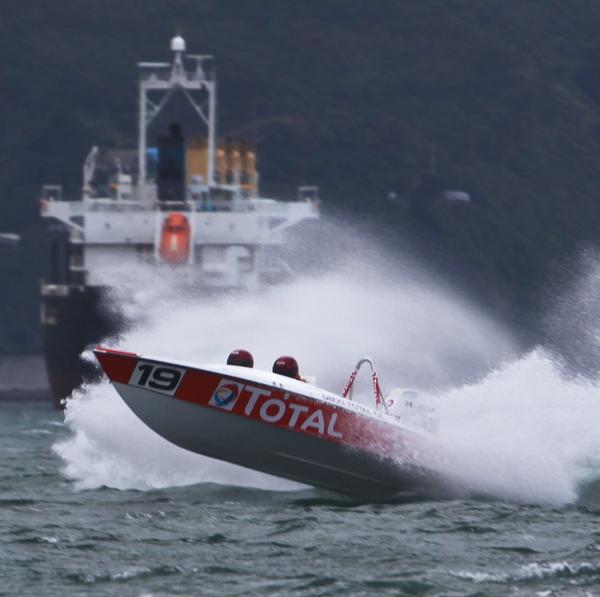 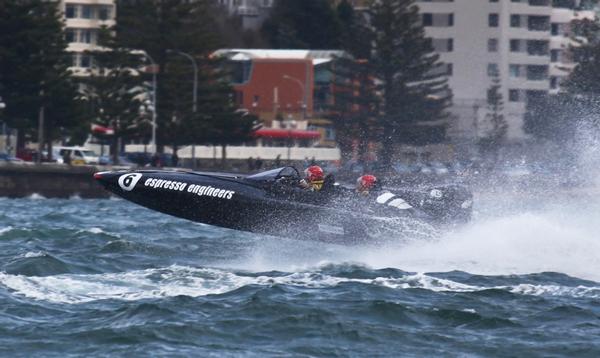 The eighth and final round of the Rayglass New Zealand Offshore Powerboat Racing Series was held in Wellington, and once again the city lived up to it's reputation with plenty of wind racing across the harbour, whipping up the waves and sending spray flying.

With so many of the seasons titles already decided, Wellington was the ideal opportunity for teams to strut their stuff and put in a performance that would give their opponents something to think about over the winter months. Today's conditions however were difficult and many crews concentrated on getting round the course with as little injury to boat and drivers as possible. Even driving slowly the boats were getting plenty of airtime and several of the boats retired early or completed the race with damage sustained from the constant pounding as the boats leaped around the course.

The stretch out of Oriental Bay, round the lighthouse at Jerningham Point and into Evans Bay proved challenging for all with the incoming swell hitting the water deflected off the sea walls, causing many of the boats to skew sideways or leap off the uneven waves.

After a season of drama the two batboats competing in the Super 60 class were of significant interest, with the defending title holders 'Espresso Engineers' raced by Mike Gerbic and Dave Vazey eager to stave off the threat of 'Back2Bay6' driven by father and son team Glenn and Chris Powell.

Right from the start you could tell that this was going to be a close race and the two boats looked fairly even as they took off from the start running in toward the city from the centre of the course. The conditions, however, proved too much for Back2Bay6 who landed badly and withdrew early in the race, leaving Expresso Engineers to complete the race and claim the Super 60 title for 2011. Mike Gerbic said afterwards that the conditions were tough and that they didn't exceed 50 miles an hour. Despite this the boat spent plenty of time leaping off the waves and the crew were glad of their new water deflecting half canopy that protected them on the many occasions that the boat nosedived or ploughed through the waves.

In the sports 60 Restricted class 'Auckland District Collections' driven by Mikey Knight won their seventh race and appeared to cope relatively well with the chop, while Jono Hanley in Marineworkz put in some pretty amazing leaps, and had to retire in the last lap after the two top nuts sheared off the bolts holding the engine to the transom, causing the engine to pull away from the boat, hanging only by the two lower bolts.

In the Honda Class Mike Urquhart and James Downs retired early after enduring a number of large thumping landings, having already won the title for the season in 'Auckland District Collections 2' both felt they, and the boat, could do with a rest before sustaining serious damage. James Taylor and Shannon Thickpenny in 'Total Oil' went on to win the race for the Hondas with a spectacular performance of speed and spray, followed by 'CRD Automotive' driven by Colin and Corey Dunn. 'Rayglass' driven by Mikey Smith and Bobby Lloyd retired early after cracking their transom.

There was no sign of nerves from Warren Lewis and Chris Hanley in 'Fairview' who had a close battle with Doosan for a couple of laps before charging to the front and leading for the rest of the race. Doosan driven by Cary Gleeson and Sam Fillmore had electrical problems, losing their instruments and communication fairly early in the race and finishing second today, while 'Schick Hydro' driven by Scott Lewis and Murray Tuffin had a pump break lose which flew around in one of the engine bays for the entire race. Scott Lewis of 'Schick Hydro' said later they were lucky it hadn't punched a hole in the hull, and that they were pleased to finish the race in third place with the boat in one piece. Warren Lewis of 'Fairview' said afterwards "that was a real Offshore Race" and that while he enjoyed it, he found the conditions very tough physically. 'Fairview' take out the top spot for 2011 winning both the Superboat and 100 mile overall titles.

'Red Steel' driven by Tony Carson and Brooke Faulkner excelled in the conditions today and took out the Superboat Lite race from NZ Blokes, and Barracuda Kayaks who retired early with ballast issues. Today the boats needed to be able to move water toward the bow of the boat, to keep the bow down and prevent boats doing back-flips off the waves. Grant Smith was at the helm of Barracuda Kayaks today with Andrew MacBeth and said it made no sense to continue without enough ballast, making the call to pull out before damaging the boat. Red Steel looked to be well in control and with their extra waterline length were able to deal more effectively with the choppy conditions than NZ Blokes driven by Bob Smith and Andrew 'Flea' Koolen who were not able to go as fast in the rough.

The outstanding performance of the day was from 'Gull Force 10' who had been plagued by engine issues earlier in the season, and were better suited to rough water. Today was their day, and the boys powered around the course, leaping the might Scarab clear of the waves. While their boat was probably the most suited to the conditions of any, they still found the landings tough and at one point both crew found themselves on the floor, and had to throttle off so Gavin McGrath could straighten the steering wheel which had bent when the driver Haaka Le Suer landed on it. Konica Minolta had already won the classic title for the season and with the conditions not in their favour, concentrated on finishing the race without damage.

The NZOPA would like to thank the Wellington City Council, Royal Port Nicholson Yacht Club, NZ Crane, HeliPro, and Energizer for their support in making the Wellington race possible.