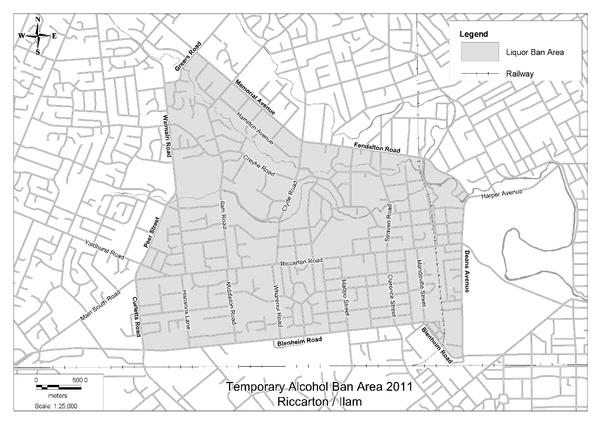 A six-month temporary alcohol ban comes into effect tomorrow that will prevent people from drinking in public places in Riccarton and Ilam.

The Christchurch City Council agreed to the temporary ban late last month, and they are considering making it permanent. See map of ban area.

The ban is being put in place to help address increased violence and disorder resulting from the transfer of people from central city hospitality zones to suburban areas since the 22 February 2011 earthquake.

The ban makes it illegal to drink in public places, or to carry an open bottle or can containing alcohol in public places.  People who breach the ban may be arrested, and if charged could appear in the Christchurch District Court. If convicted, they may be liable for a large fine and court costs, and a criminal conviction would be recorded against their names.

The ban applies 24 hours a day, 7 days a week, to all public spaces controlled by the Council, and all roads, whether Council-controlled or not. It does not apply to places open to the public that are under private ownership, such as private car parks or private sports grounds.

Christchurch Mayor Bob Parker says the ban is an incentive to exercise common sense when drinking.

“What this ban adds up to is an incentive for people to drink sensibly, and to keep their drinking of alcohol to licensed premises or at home,”  he says.

The Council also asked staff to investigate and report back on temporary or permanent bans in Merivale and Akaroa and amending the current alcohol ban in Papanui. It is expected staff will be able to provide recommendations by the end of May.