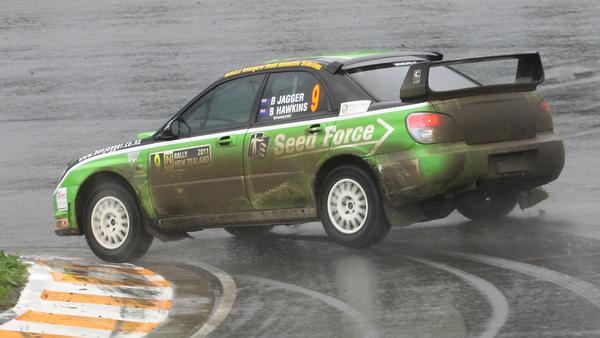 Ben Jagger hopes an improved car set up will keep the pair mixing it up with the top five over this weekend
After showing good form at Rally New Zealand earlier this month, a few setup tweaks on the SeedForce Subaru WRX Impreza for this weekend's Trusthouse Rally Wairarapa should see Whangarei driver Ben Jagger in good stead for the third round of the Brian Green Property Group New Zealand Rally Championship.

Jagger along with co-driver Ben Hawkins put in a top scoring effort at the second round of the championship placing sixth after day one at Rally NZ in the Subaru. Unfortunately the pair were forced into early retirement on day two with gearbox failure.

With the pair looking to Wairarapa for valuable points before their home event at Rally Whangarei in July, a strengthened gearbox and improved car set up is expected to keep the pair mixing it up with the top five over this weekend.

"We made some slight set up changes to help with the turn in on the car for this weekend so it will be good to see how that works for us here. We've been really looking forward to this event and aiming for a top five finish here." said Jagger.

Clashing with Rally Argentina this weekend's national championship will be competed without the current points leader Hayden Paddon leaving Masterton's Richard Mason as the clear favourite for his home event, an opportunity for him to take over the series lead before round four.

For Jagger this also gives him an opportunity for some extra points with the Geraldine driver out of the way for one round a chance not to be missed if he is to move closer to the team's goal of fifth place overall by the season end.

Currently sitting in tenth place Jagger can be expected to really turn it on this weekend. His main competition will come from Mason, Chris West and Dean Sumner, all championship winners, plus iconic female driver Emma Gilmour who proves to be a championship contender every season without yet claiming the top honour.

Rally Wairarapa gets underway with a ceremonial start at the Copthorne Hotel and Resort Solway Park 6pm Friday the 27th May.

On Saturday the 28th the rally covers 157.91km of competitive stages with two stages to the west and south-west of Masterton and the remaining six northwest of Eketahuna around the settlement of Pongaroa. The first car starts at 8:25am and finishes the day with an hour long service from 4:55pm.

On Sunday the 29th the rally covers a further 126.04km with nine stages around Eketahuna. The first car starts at 8:40am and the event finishes at 4:15pm at the Copthorne Solway Park in Masterto
Further information regarding Ben Jagger and the SeedForce Subaru Impreza WRX is available at www.benjagger.co.nz.