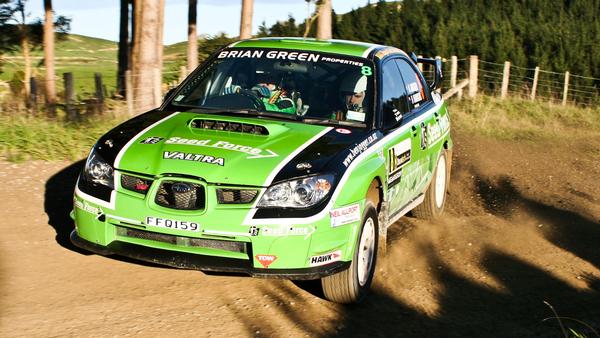 Ben Jagger - strong result but says we can do better! CREDIT: Jody Seabright

Solid Top 10 Result But Jagger Says We Can Do Better

A solid result from Ben Jagger inside the top 10 at Rally Wairarapa over the weekend has moved the Whangarei driver up in the points standings but he believes there is a lot more performance in the car which he hopes to extract before his home event mid July.

"We didn't have a smooth rally and we had our share of close calls over the weekend. On Sunday we pushed the car pretty hard but just couldn't get the times out of it we were expecting." Jagger said.

"We couldn't get in the testing time we had planned before the rally but with quite a bit of time between now and Rally Whangarei and no problems needing to be fixed on the car we won't have any problem getting that done and will be stronger for our home event." he said.

An upgrade to the gearbox on the SeedForce Subaru WRX Impreza between Rally NZ and Rally Wairarapa had the car off the road and unavailable for the planned testing before heading south. A test session conducted prior to Rally Whangarei will consist largely of understanding and determining how to utilise the complex Subaru electronic differential network to produce the optimum performance from it.

"We will be setting up a session for us and Richard Mason in Northland before the event so hope to get some good pointers from him on setting up the Subaru." he said.

The Top 10 result from Rally Wairarapa pushes Jagger up into ninth place on the championship ladder reversing a dip in the points tally after his mechanical retirement at Rally NZ earlier this month.

Targetting a position within the top five by the end of the season Jagger believes the competitiveness has increased somewhat this year.

"I've noticed that the pace has lifted after Hayden Paddon's overseas experience has pushed everybody to go much harder to keep up with him. Even though there aren't as many in the championship this year it is definitely more difficult and the guys up the front are really going for it." he said.

Added to that is the new points structure which by offering bonus points for completing legs of the rallies punishes the teams hard if they are unable to finish for whatever reason.

With Rally New Zealand being a non-WRC event this year the International Rally Whangarei will be the premier highlight of the rally calendar this year.

"I can't wait for Rally Whangarei and we hope to be able to put on a good show for our friends and supporters at our home event." said Jagger.

More information about this event can be found by visiting www.benjagger.co.nz or www.rallywhangarei.co.nz