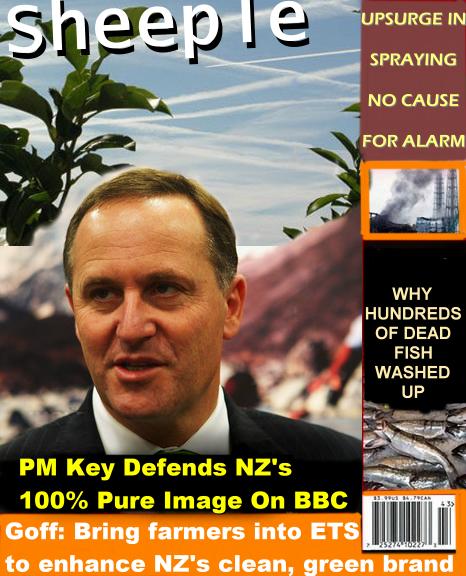 This film, made in Whangarei, includes a host of interviews with Northland locals, all of which were conducted in May, 2011 to find out the level of knowledge that exists in the community about geoengineering/ chemtrails. The news is not good.  Alas, owing to the mainstream media's failure to educate the New Zealand public about this, the vast majority still have no clue about the spraying of metallic salts that is occurring right above their heads on a regular basis. Most erroneously believe that the trails they are seeing are normal vapour trails, even though they persist. Condensation trails aka 'contrails' , can not form behind aircraft unless the atmosphere is very cold. As NASA explains, "Contrails only form at very high altitudes (usually above 8 km) where the air is extremely cold (less than -40 degrees C/ -40 degrees F)." Chemtrails are forming in conditions that are not at all suitable for condensation trails, as this video indicates, eg at an altitude of 3-4000 feet.

New Zealand has become like much of the rest of the world - a dump for toxic aerosols, aka chemtrails, that are being used with weather modification technology, amongst other seemingly highly dubious and destructive functions.

There have been obvious chemtrails and evidence of weather modification technology over this area for approximately 17 months now.
This video includes footage of Alex Jones of Infowars.com talking about geoengineering and a short segment from an interview Clifford Carnicom had in February, 2011, during which he talks about how fragile the earth's atmosphere is.

The song 'Addicted to War' is from Dave Von Kleist of The Power Hour and can be downloaded from their website.