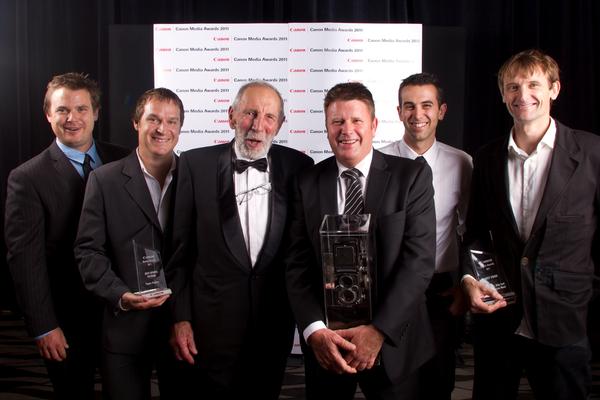 Peter Bush and some of the photographic award winners CREDIT: Canon Media Awards 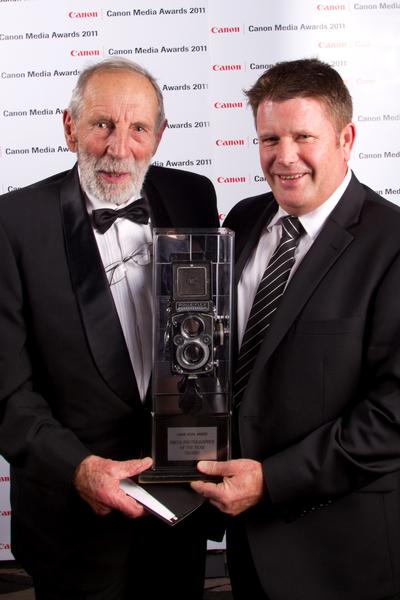 Legendary photographer Peter Bush made a special appearance to present the awards to each winning photojournalist. Peter Bush went on to be honoured for his outstanding contribution to photojournalism.

Mark Mitchell from The New Zealand Herald took out the supreme award in the photography section. His winning portfolio earned him the title of Best Senior Photographer in New Zealand. It features six striking photos that capture heart-stopping moments from the past year.

The portfolio includes emotional pictures of members of the Greymouth Community during the Pike River tragedy; a photo of Deans' historic Homebush Station homestead, destroyed by the Christchurch earthquake; and a shot of a fiery confrontation between cricketers Scott Styris and Mitchell Johnson.

Mark Mitchell, says, “It was a big thrill to win the award. It was a huge news year and I just happened to be in the right place at the right time to be able to capture good, strong images.”

Benjamin Curran from The Marlborough Express was named Best Junior Photographer for his portfolio of six photographs. Benjamin’s pictures show his ability to produce stunning imagery from rural New Zealand, as well as photos to support local news stories.

Mike Johnston, Country Manager of Canon New Zealand, says, “This is obviously a special section for Canon. We have been supporting New Zealand media’s most outstanding photojournalists for a number of years and really enjoy celebrating their remarkable work.

“It is always a great moment when the winning photos are presented at the Canon Media Awards and New Zealand’s photographic talent is on display for the industry to appreciate,” says Johnston.

Richard Robinson from The New Zealand Herald won Best Photo Essay for his series on the stranding of a pod of whales. Best Video was presented to Amy van Dyk, Mike Scott, Matt Rilkoff and Aaron Wood from the Taranaki Daily News.