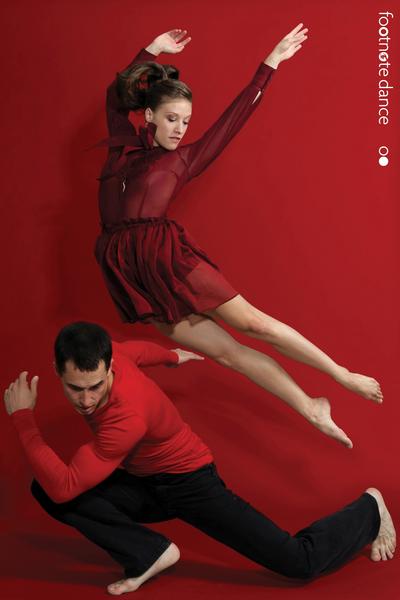 It’s a postcard from New Zealand that dances, sings, shouts and swings – to the world, with love from Aotearoa, full of fun and fabulousness.

Footnote Dance are proud to announce a voyage to the other side of the world, Our own Footnote Dance will be performing in special seasons in Antwerp July 3 and London, July 15, 16 and 17.

Rugby, tui, wiri, pavlova, the silver fern, Len Lye, Michael Parmenter, buzzy bees, our scenic beauty, barbeques and even Colin McCahon all get a makeover of the movement kind in a lighthearted look at what makes us special in Aotearoa.

Along for the ride is the best of New Zealand culture, with music from The Black Seeds, The Phoenix Foundation, Chris Knox, Eden Mulholland and Flight of the Conchords, and costumes designed by Wellington fashion icons Laurie Foon and Mandatory.

“It’s very exciting that New Zealand contemporary dance, alongside the best of its fashion and music, will be recognized on an international stage as part of the voice and identity of the country,” said Footnote director Deirdre Tarrant.

Three significant pieces, including the award-winning and critically-lauded Hullapolloi will be performed on the cultural excursion.

“Ex-pat Kate McIntosh will next be seeing her stunningly good Hullapolloi choreography and collaboration with Wellingtonian Jo Randerson, at home in Belgium in Antwerp, where we have a residency at Zimmer – an internationally recognised performance workspace.

“We’re also taking Footprint, which we originally developed for the Capital E festival and we’re taking that to the Canary Wharf for the City of London Festival, July 17. The fashion of Laurie Foon and Mandatory, the design of Tony Drawbridge and the scintillating music of Mr Winter will go out to a city of millions,” said Deirdre.

“As well, we have Roll Out the Red Carpet, a new work that will debut at the City of London Festival and then come home to New Zealand as part of the Real Festival running alongside the games of the rugby world cup later this year.

“What was glorious about Hullapolloi was that you could not take your eyes off the performers. Like watching small children playing, each figure had their own personality quirks and each was identifiable amongst the collective aura… The music was equally striking; it had a personality all of its own, possessing qualities of both the group and each individual figure, and both drove the performers and reflected their presence and energy.”
– Jen Aitken, Critic, March 29 2011

Roll Out the Red Carpet
A new series of work showcasing a whole pavlova of slices of Kiwiana; a lighthearted look at what makes this country special in so many ways.
July 15: Paternoster Square, London
July 16: Canada Square Park, Canary Wharf, London (City of London Festival)