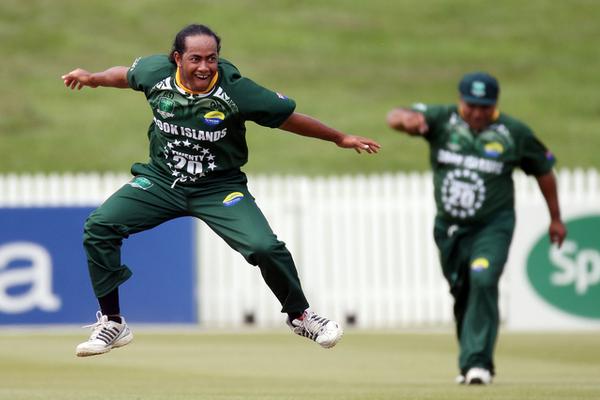 A bag of prestigious awards have capped a boom year for Cook Islands Cricket, whose development into a top Pacific cricket nation is fostered by the support of the Northern Districts Cricket Association.

Cook Islands Cricket Association General Manager Alister Stevic was awarded the country’s 2011 Sports Administrator of the Year award - reflecting cricket’s growing popularity in a nation in which netball, rugby sevens and sailing have traditionally been the sports to fly the Cooks’ flag high.

Stevic, a New Zealander who was operations manager for Rotorua Cricket before taking on the Cooks challenge in late 2009, has also been nominated in the same category for the Pacific Islands Sports Awards, which cover all Pacific nations and will be announced during the Pacific Games in New Caledonia in September.

Patia is clearly a man of many talents - he will be familiar to those who witnessed the historic Telecom Cook Islands v Northern Districts Maori T20 at Seddon Park in March, having umpired the match. Shortly afterwards he became the first Cook Islander appointed by the ICC to umpire at an ICC East Asia-Pacific Tournament.

Northern Districts Operations Manager Pat Malcon travels annually to the Cook Islands in the New Zealand off-season to assist the small CICA team and its many volunteers with coach and player development programmes.

“The growth in the game right across the Cook Islands has been phenomenal over the past two years and that’s a great credit to Alister and his staff,” said Malcon, who will return to the Cooks in August.

“The islands that make up the Cooks are scattered across the ocean at an incredible distance from each other and yet, with just three staff, CICA have succeeded in growing the game and playing numbers significantly, not just on the main island of Rarotonga, but on the far-flung islands where cricket is now a major part of village and school life."

Both Malcon and Stevic praised the hard work of CICA staffer and Junior Development Manager Shane Thompson, who has been instrumental in ensuring cricket has become the first sport in the Cook Islands to become fully integrated into the primary school system.

Thompson was a nominee for the 2011 Cook Islands Coach of the Year.

“National awards like these underscore the exciting development, the increasing place of cricket in the Cook Islands and its profile, something Northern Districts Cricket is very proud to be supporting.”

Under Stevic, the CICA - widely regarded as the most innovative national sporting federation in the Cooks - has implemented many things that we take for granted in New Zealand: junior and women’s competitions, umpiring training programmes, courses for teachers, coaches’ associations; plus grown local corporate support to sustain the game at club and national level.

Next on his to-do list? “Shared grounds with other codes means that we can’t put down clay or concrete wickets, so we are working tirelessly to get title to land so that we can get dedicated cricket fields - which is a real challenge given limited funds and space.”

“For a small island cricketing nation, the support that Northern Districts Cricket provides us is truly invaluable and in no small part has contributed to the success of Cook Islands Cricket within the past 12 months,” he adds.

“We also really welcome any Australian or New Zealand visitors keen to come over to the Cooks for a cricketing holiday. The local cricketers here absolutely love playing against new faces, so we have facilitated great cricketing holiday packages with the luxury Edgewater Resort & Spa in Rarotonga and Island Car Hire to suit every budget.

"We’re also planning to launch an international Sixes tournament later this year so just get in touch with us if you’d love to combine a holiday with playing some relaxed cricket.”

Find out more about cricket in the Cooks at http://www.cookislandscricket.co.ck