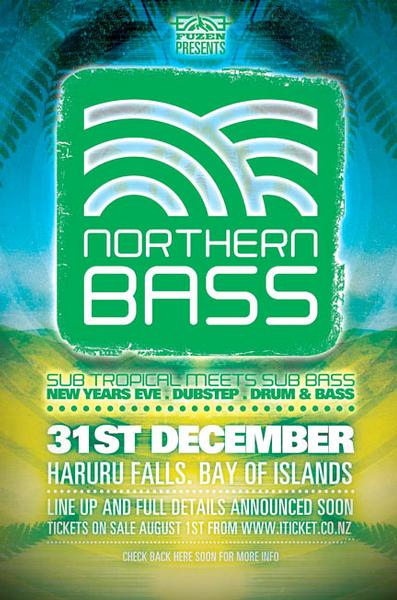 FuZen Entertainment is proud to present Northern Bass – an outdoor day-night New Years Eve dance party at Haruru Falls near Paihia in the Bay of Islands.

Northern Bass will be a fully self-contained and licensed R18 event complete with camping facilities. It will provide the Bay of Islands, the wider Northland and the seasonal influx of visitors with a much sought after New Years Eve music festival.

FuZen Entertainment are one of the most experienced and respected dance party promoters in New Zealand and will be bringing some of the best local and international Drum ‘n’ Bass and Dubstep DJs together in the Bay of Islands for the biggest dance party Northland has ever seen. The line will be announced soon.

Northern Bass will be the first time in years that thousands of locals and visitors to the Bay of Islands will have the chance to see in the New Year with a significant music event. It will also fill a void in the New Years Eve dance party market by finally providing Drum ‘n’ Bass and Dubstep fans with a dedicated festival.