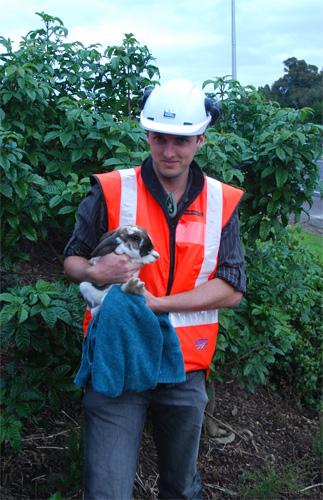 Network engineer, Anneliese Sabrowski, says that AMA responded to a contractor’s call that the wandering rabbit had made a home for itself in a planted area beside the southbound on-ramp at Northcote Road.

“It was obviously not wild,” says Anneliese, “It was very friendly and I was able to feed it out of my hand.”

Anneliese says the animal must have been there for some time because passing motorists were calling out to her, asking if she was there for the pet. The risk to the animal’s welfare was not the AMA’s only concern. The rabbit was a potential safety hazard for people who were stopping on the on-ramp to try to catch it, causing congestion.

Despite its friendly nature, the rabbit was difficult to catch. In the end, Anneliese and her colleague Rick Gardner used food to distract the animal before it was taken into the AMA’s safe care.

“The AMA’s job is to maintain and operate Auckland’s motorway network and sadly in a high speed environment like that we are often recovering family pets that don’t survive, so it’s nice to be involved with a story that does have a happy ending,” says Rick.

Anneliese is now caring for the rabbit. The AMA has contacted North Shore vets and the SPCA but they have had no reports of a missing pet.

If the owner cannot be found the pet will be given a permanent home with other staff in the AMA team – a home far enough away from any motorway that might attract an adventurous rabbit with an urge to travel.