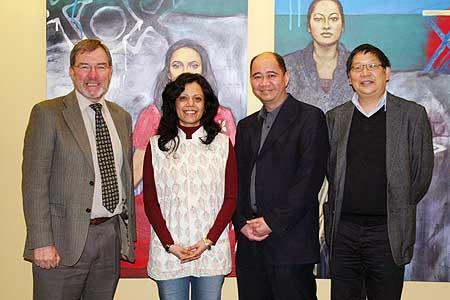 New Zealand’s Asian community is being turned off mainstream media because of its ignorance, reinforcement of stereotypes and lack of understanding.

A lively panel discussion at the Albany campus heard last night how the Asian community was increasingly turning to the growing “alternative” Asian media.

“We’re in the midst of a significant transformation of the media landscape,” said Professor Spoonley.

His research indicated that Asian communities were not consuming New Zealand mainstream media, but accessing their own media across a variety of languages – both from their country of birth and in New Zealand. The development of digital technology enabled communities to connect and reflect their own voices, but the downside was the lack of quality.

Ms Samant said ‘some are run like patriarchal feudal empires, have no critical discussion, and are inward-looking’.

Ignorance about Indian history and geography by reporters surprised Ms Samant, who had also been approached to comment on the assassination of Pakistan’s Prime Minister Benazir Bhutto.

Gilbert Wong as a Herald reporter was tasked with reporting on why Asian drivers were so bad, and Lincoln Tan was dismayed at the lack of understanding of the various Asian markets and the power of audiences by media management.

The panel discussed the rise of Maori Television, and a comparison with Australia’s SBS channel pointed towards the need for more Asian reporters and editors to be employed by mainstream media. This would enable a more effective engagement with Asian communities to report on stories in a culturally appropriate way, and adjust the current Western-focused news filter.

The panel discussion was the second in the University’s 2011 Asia Hub Lecture Series.