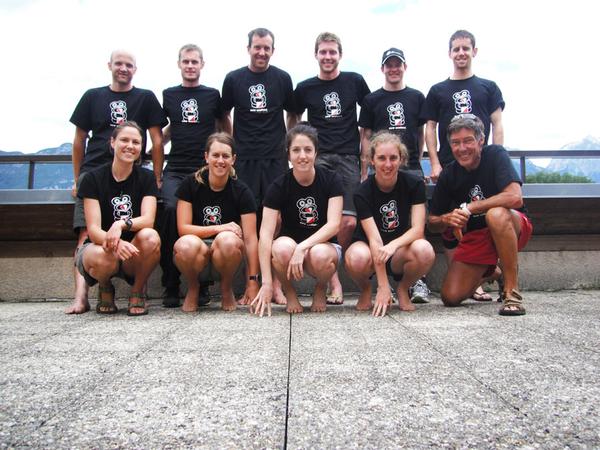 The New Zealand orienteering team is in great shape as they count down the final hours before the World Orienteering Championships kick off in Savoie Grand Revard, France.

In stark contrast to 2010 the team is at full-strength and uninjured - with no bruised ankle-bones for Lizzie Ingham, or last minute appendectomies for Ross Morrison.

A week of intense competition in Europe, has put Ingham into top form - with a win on day 5 at the Swiss 7-day: “ Six races in seven days have seen the rust off my navigation and my fitness is now the best it’s been.”

With a full-strength womens team this year - with NZ Champion Penny Kane (middle distance) and long distance runner-up Amber Morrison alongside her - Lizzie is looking forward to a big week of racing: “All the preparation is done now, all that's left is to put it to good use in the forest.”

Dual National and Silva Superseries Champion Ross Morrison has put himself into the top ten placings in build-up races, in-line with his goal of a podium (top six) placing in the sprint: I’ve been getting a good feeling for the maps, terrain and the best places to run. One of the highlights for me has to be the sprint training in Annecy. It was such a beautiful city, and we finished the training (with sister Amber) with huge grins on our faces.”

Last years campaign was impacted by an appendectomy ten days prior to the week of the Worlds and the only issue this year for Ross is sore ankles from intense training in the rough and rocky terrain.

A positive mindset is his secret weapon for the week: “the running is difficult in places, and the navigation even more so, but that’s what orienteering is all about!”

Norwegian based Chris Forne has kept a low profile in his buildup, but his efforts in running 225 km in under 27 hours to smash the record for the Norwegian ‘26 peaks Race’ by 11 hours have not gone unnnoticed.

The former World Adventure Racing champion and current World Rogaining champion(24 hour navigation) has the supreme fitness and navigational skill to be the best in the world in the longer finals at the tail-end of the Championships week.


With in-form NZ junior representative Toby Scott joining the team, after superb racing at the Junior Worlds, and specialist runners Michael Adams (long distance) and Tane Cambridge (middle distance), the mens team has one of its strongest relay teams in years, and two talented reserves in hand.