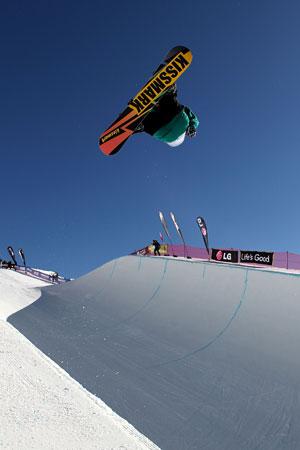 The final day of competition at the 100% Pure New Zealand Winter Games brought with it some memorable highlights with riders going out huge with tricks of true World Cup standard. Riders were again treated to another spectacular blue bird day where Finland’s Janne Korpi and China’s Xuetong Cai took out the men and women’s titles in the LG Snowboard FIS World Cup Halfpipe finals.

A field of twelve men and six women including world number one Nathan Johnstone of Australia competed in a two run semi-final with men and women alternating runs. The bar was set high from the start with internationals Taylor Gold (USA) and Ursina Haller (SUI) riding hard to place in the finals. Gold demonstrated great technical ability and variety with a solid second run earning him 92.5 points and a place in the final. Haller recovered quickly from a poor first run to gain 86.3 in run two, reminding spectators why she is ranked 4th in the world.

Yesterday’s qualifiers saw a further six men and two women going straight to final giving a total of twelve men and six women to battle it out in the finals.

Janne Korpi of Finland stole the limelight in the end making easy work of the Olympic pipe with a blistering 93.0 point performance which included a backside rodeo alley-oop 540 nose grab followed by a backside 900 mute grab into a frontside 1080 tail grab cab 1080 nose grab finishing with a stalefish.

“The competition went really well for me today. I decided which run I was going to do yesterday, stuck to it and it paid off. I didn’t do anything new today but changed the order of tricks and it paid off. It’s my first Winter Games and I’m really happy to have won and be a part of the competition,” said Korpi.

Yiwei Zhang of China took out second place with a score of 90.8 with Dimi de Jong placing third with 88.0 points.

There were no surprises in the women’s field with the world number Xuetong Cai of China leading from the start with an impressive score of 92.8 made up of a frontside indie, back 540 mute, frontside 7, cab 3 mute grab and frontside 540 melon grab. World number two Holly Crawford of Australia took out second place with 88.5 points with Ursina Haller of Switzerland taking third place with 77.3 points.

“It was a great competition today, the pipe is in great condition and the weather is perfect for competition. The Chinese always put up a strong fight raising the level of competition. It’s great to see the girls pushing the boundaries. I didn’t pull any new tricks out the bag today as it’s early in the season and there is no point going out too hard and injuring yourself. I’m really happy to have placed on the podium today as I was injured last Winter Games,” said Crawford.

Judge Ste’en Webster was really impressed with the level of competition.

“Today was excellent with the riders really stepping things up a gear going into the final. Janne Korpi’s winning run was just outstanding and a pleasure to watch. There were no new tricks today but we did see a lot of doubles which is great. Although it’s fast becoming a stock trick, it’s still not necessarily a competition winner and if riders chose to perform this trick it needs to be executed with real precision. It’s been a really fantastic 16 days of competition and we’ve been blessed with great weather. It’s a competition we’re really happy to be a part of,” said Webster.