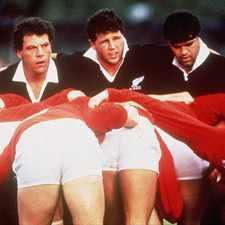 Romania's forwards coach Steve McDowall is aiming to improve his team's scrum ahead of their Pool B opener against Scotland.

McDowall revealed the Oaks had not practised scrums since they arrived in Ashburton on 1 September.

"We haven't actually done any scrums since we've been here," he said. "I would like that we do a lot more scrums than we have.

"The coach (Romeo Gontineac) feels that he wants to focus on other areas of the game."
McDowall hopes he will be able to fine tune his front line before Romania's opener against the Scots in Invercargill on 10 September.

"We'll get one or two sessions before our match against Scotland," said the former All Black.

Even if Romania's forwards have yet to work on their Rugby World Cup scrummage, McDowall says he has been building on the Oaks' style.

"We tend to have a heavy centre hook on the outside leg in Eastern Europe, which means they tend to scrum a bit higher rather than lower," McDowall said. "So we'll try and work with their tradition and techniques."

Romania are also preparing for a strong showing from Pool B opponents England and Argentina. England field a strong front line bolstered by Andrew Sheridan, who weighs 123kg and can bench press 225kg.

"It really comes down to our entry and our set, and obviously our positioning for our ball and our hooker," said McDowall.

The New Zealander also thinks Argentina's 'Bajadita' scrum technique is no longer the force it once was.

"Argentina's scrum is not what it used to be," McDowall said. "I think a lot of the hype of the past tends to come through to the front.

"I'm wary of their scrum, but for me, for Argentina, it's their backs. They're very opportunistic and they've got speed and grit."

Romania's physical trainer Olivier Rieg, who spent 10 seasons with French Top 14 club Biarritz before joining the Oaks in June, says the team's scrum preparations will be helped by their off-field strength training.

"Explosive exercises and our sessions in the gym are transferred on to the field and in their scrum techniques," said Rieg.