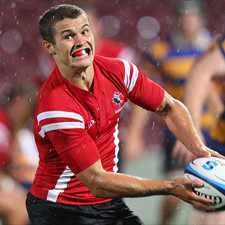 Canada wing Taylor Paris is the youngest player at Rugby World Cup 2011, but he has not asked senior teammates what he should expect.

Instead the 18-year-old, who celebrates his 19th birthday during the tournament, wants to learn for himself.

“I have been rooming with Adam Kleeberger, and I also speak to Ander Monro and Pat Riordan and they help me out, but I think there is only so much you can learn from other people telling you.

"I think the only real way to find out what these tournaments are like is just to experience it yourself."

Paris could replace Thretton Palamo as the youngest player to appear at a Rugby World Cup. Palamo of the USA was 19 years and eight days old when he came on as a substitute in a pool game against South Africa in 2007.

Paris turns 19 on October 6 and Canada will play their four Pool A matches against Tonga, France, Japan and New Zealand before then.

Paris, from Barrie, Ontario, already has a record-breaking habit.

After taking up rugby at high school five years ago, he quickly jumped from Ontario and national under-17 squads to become the youngest player to debut for the Canadian Sevens team, scoring a try in his first match as a 17-year-old at the Wellington Sevens event last year.

He then became the youngest player for the full Canadian team when he took the field against Belgium in November last year. In his second match, against Spain, he ran in two tries.

Despite that, Paris wasn't sure if he would be in New Zealand.

"I broke my hand about four months ago and so I wasn't sure how I would go. When I saw my name in the 50-man roster for the World Cup I was so excited.

"So when Kieran (Crowley, the Canadian coach) told me that I had made the final squad, it was just so, so exciting. This is the absolute pinnacle."

Paris does have one area of responsibility in the Canadian team. As the youngest member he has to carry with him, at all times, the team's stuffed moose mascot Captain Green.

But he rates that a much better task than one he was saddled with during his first international tour.

"I had this giant pink bunny rabbit with ears that were huge," he laughed.

"So we were going through the airport and the ears were sticking out of my bag and so the guy made me pull it out and go through a full security scan, probably thinking 'what's this guy doing with his huge pink bunny rabbit?' "