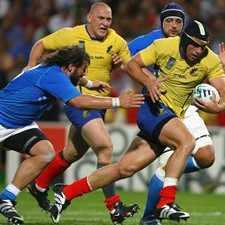 Ovidiu Tonita is working to recover from an injury sustained in a warm-up match CREDIT: RWC

Romania's coaching team are doing all they can to hasten the return of key players from injury to reinforce their front and back rows, as well as the three-quarter line.

"We are seeing an improvement every day, and most of our injured players are already back to playing rugby," Rieg said ahead of the opening Pool B match against Scotland on Saturday.

"So far it's been positive, but I still can't say who will be in the line-up against Scotland."

Prop Nicolae Nere, back row Ovidiu Tonita and wing Catalin Nicolae are recovering from injuries suffered during The Oaks' friendly match against French side Perigueux in August.

"Every night the team management and I assess how the injured players are doing and who is ready to play," said Rieg.

"At the moment everything looks good on paper. We just hope the players will make the most of their capabilities in their match against Scotland."