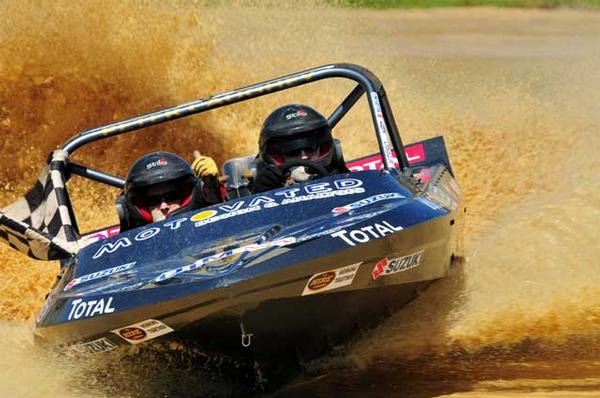 The high adrenaline jet boat race series steps up a gear with the return of a two round world championship to New Zealand’s shores from 11 to 19 February 2012.

Teams’ compete for either the 1000 plus horsepower Superboat or lesser power International Group A titles using water jet propulsion boats. Each boat has a driver and navigator that have to complete a pre-determined course through narrow water channels in the fastest time possible. It’s the combination of speed, agility, memory and mechanical reliability that make the series more challenging than most, with spectacular spills the penalty when it goes wrong.

Current holder of the world Superboat title, Christchurch’s Peter Caughey has yet to confirm his entry in defence of a seventh title. Having first won in 2001, the Fernside based jet sprint boat builder says the coming season will see one of the most diverse line up’s in the series’ history.

“Certainly I know there is a number of American’s and Canadians that are considering coming here. There are a number of packages and deals being offered from accommodation, vehicles, and shipping – through to lease boat arrangements as well,” says the six time world title holder.

“In the USA there are a good number of drivers showing a lot of form and the sport is in better shape there now than it has been in many years. The quality of venues and people managing it has improved markedly.

“The competitors are keen, the spectators are keen and television is showing more interest now than they have in the past. Ironically though, the current American Superboat champion is a Canadian: Cory Johnson, who is a very capable racer and it’d be significant for him to contest the world champs here.”

“There are just so many hot pick names in both Superboat and Group A – it has to be said. Looking down the list, Wanganui’s Leighton Minnell has to be hot property with the current New Zealand title and too Duncan Wilson, he is back and hauling. Dean Finch, from Australia and his twin-turbo package, if he does manage to make it. He’s a bit of an old fox; he’ll sneak around and pull out a blinder when necessary.”

New South Wales based Slade Stanley, holder of the International Group A title, says he’s keen to take a trophy home, but has yet to commit which formula he will contest. Stanley has purchased a New Zealand made boat and is fitting a twin-turbo engine to make the transition, but has yet to debut the combination.

“Also in Group A you’ve got to say Taupo’s Reg Smith is on form, you don’t win the New Zealand champs by chance. Also Ted Segedis from Australia, he and his brother Derek have got ‘their tail up’ as the Aussies would say. They know they’ve got a good package and they’re not short on telling us. Brooke Dixon of course, who has been running second and third at Australian championship rounds,” adds Caughey.

Supporting the international Group A formula, the Wanganui District Council has thrown its weight behind a deal to embrace the world status series that includes a number of initiatives for the final round on 18-19 February.

As the spiritual home of the jet boat, president of the New Zealand Jet Sprint Association (JSA) Andrew Guthrie says the world series will include free-to-air television coverage.

“TV3 have again confirmed they will broadcast both the world and national series, buoyed by ratings well ahead of other shows in the same Sunday afternoon time-slot, including other networks.

“It will also show on Sky TV and around the world via global partners to an audience of millions. It’s big for the sport, for New Zealand and our sponsors. It’s also a chance to recognise Kiwi ingenuity internationally,” says Guthrie.

“The world series has long been a New Zealand versus Australia battle with a few American’s in past years, but the tide is turning and social media like Youtube action clips have seen the sport’s profile gain rapid popularity.

“Next year’s series will be one of the toughest ever I reckon – for everyone. Each country has some real strengths and I think a lot of it will come down to the complete package – the reliability and ability,” adds Guthrie.

Being in the height of the New Zealand summer will bring other positives too believes Guthrie: “I’m sure that’ll be appreciated by our off-shore guests. Plus being away from peak travel makes it more affordable. And hopefully there will be an excess of camper vans from the Rugby World Cup that can be utilised to make it cheaper for family groups.”

The mid-February dates keep teams in the lower North Island, allowing visitors plenty of time to explore the regions.

Starting on Saturday 11 February, the two-day opening round will be raced at the aqua track located inside the Tauherinikau race course, 4.5 km north of Featherston, on the east coast.
The following weekend and final round (18-19 February), starts with a parade of the boats in the main street of Wanganui. After Saturday’s action teams’ will be treated to local hospitality before Sunday’s title finale. A formal prize giving dinner will be held in the Wanganui Town Hall in the evening.

The New Zealand championship season starts on 4 December at Meremere with the two world title events back-to-back sandwiched in the middle of the five month calendar.