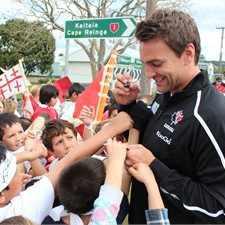 Canada recorded a narrow victory over a strong New Zealand side on the opening day of Rugby World Cup 2011.

Sadly for Canucks' fans, however, it was not Pool A rivals the All Blacks their heroes saw off, but a team of schoolgirls.

The Canadians delighted a gathering of local youngsters in Kaikohe, in the far north of New Zealand, when they grabbed a ball and joined Northland College's female rugby team in a spontaneous game of touch rugby.

It was awesome,” said Delnah Martene, Northland's deputy head girl. “It was great that they were keen to get into it and play with us.”

Children from four rural schools were in attendance for the Canucks' visit. Ipu Absolum, a teacher at Northland, said meeting the rugby stars was a huge thrill for them.

“To have a visiting World Cup team, this is such a highlight,” said Absolum. “These are country kids, they see local games and world-class rugby only on TV. Words can’t explain how brilliant this is.”

The vast majority of students at Northland are Maori and the Canadians were welcomed by a powhiri, which was followed by prayers, speeches and singing.

Final-year student Ethan Harris said it was a fantastic opportunity for cultural transmission.

“It’s pretty cool, sharing our Maori culture with them and showing them how we do things up here,” he said.

Not that he would be changing his allegiance from New Zealand. “The All Blacks will win, but good luck to the Canadians. I hope they come second."

Earlier the Canada team bus was waved down at the small town of Ohaeawai, where the children from the local primary school were waiting by the roadside with flags and banners.

The players got off to sign cards, T-shirts and even faces. “This is crazy,” said back row Aaron Carpenter. "It would be fair to say we’re not used to this type of reception.”