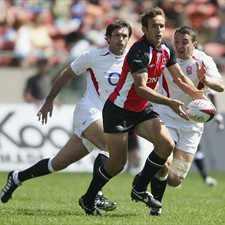 Centre Ryan Smith is one of four Canadian survivors from the Canucks-Tonga match in 2003 CREDIT: Rugby World Cup 2011

Canucks eager to down Tonga again

Canada centre Ryan Smith will always remember the Canucks' win against Tonga in Wollongong in 2003, the last time the two teams met at a Rugby World Cup.

“I think back to that game because it was quite a comedic game,” he said.

“Winston Stanley kicked a ball that landed in a bunch of seagulls, crushing one of them. Nik Witkowski got his face stepped on by one of the big Tongan fellas, not on purpose or anything, just happened.

“Mike James ended up on the top of a driving maul, waving at the crowd as he was like five feet off the ground and then unfortunately Al Charron got KO'ed by their No.10, with about 10 minutes to go.

“It was just a bizarre game and it sticks out in my mind that way. A lot of weird things happened, more than I'd seen in a rugby game before.”

Smith is one of four Canadians from the 24-7 victory that day who could line up against Tonga at the Northland Events Centre in Whangarei.

Another, full back James Pritchard, said of the Sea Eagles: “From then to now, they’ve improved so much. Back then, they were more the underdogs. They were a young side and we had some old heads on us.

“Every single one of those players now are professional, most playing Super 15 or in Europe. With players like Sione Kalamafoni, who is regarded as the world’s best prop, the side will be formidable and strong.”

Their only other RWC match against the Sea Eagles was a 37-4 win in New Zealand in 1987.

Canucks centre Ed Fairhurst, who also started in the RWC 2003, agrees the 2011 meeting will be fiercely competitive.

“Our rankings are close, I think it will be a very close game," he said.

Following Tonga's spirited comeback in the second half of the opening World Cup match against New Zealand, Canada defensive coach Clive Griffiths said: "It shows their commitment and never-say-die attitude, so the game is going to be a war, that’s for sure."