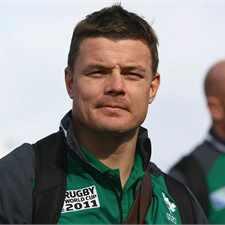 Ireland scrum half Conor Murray will make his full international debut when Ireland meet USA in their opening Pool C match at Stadium Taranaki on Sunday.

The 22-year-old has won both his caps off the bench in Ireland’s defeats to France and England in warm-ups last month, and will need to form an instant understanding with Jonathan Sexton, whom head coach Declan Kidney selected as starting fly half instead of Ronan O’Gara.

Ireland captain Brian O’Driscoll, who made his World Cup debut in that match, says Murray deserves his place in the starting XV.

“He’s confident but not arrogant, he has good inner-belief,” he said.

O’Driscoll doubted that Murray, who has produced some excellent performances at provincial level for Munster in the past year, would succumb to the pressure.

“People are picked to play international rugby on the back of their performances for their province. Just because you put on a different jersey doesn’t mean you change your game.”

Ireland have never lost to USA, but the Eagles will have the added motivation of playing on 11 September, 10 years to the day after the 9/11 terrorist attacks.

Eagles prop Mike MacDonald, who will win a USA record 63rd cap on Sunday, said the significance of the occasion was not lost on the team.

“It’s a great occasion, being the 10th anniversary of 9/11 and our first game of the World Cup. It really means a lot for me that it has come at this time,” he said.

USA’s strength is at the edges of the ruck, where captain Todd Clever and Louis Stanfill make life difficult for opposition ball runners, and on the wings, where James Paterson and Takudzwa Ngwenya await.

But getting the ball to the wings may prove difficult. Irish-born coach Eddie O’Sullivan has selected the untested combination of Roland Suniula at fly half and his brother Andrew Suniula at inside centre, while Ireland have the vastly experienced midfield of O’Driscoll (113 caps) and Gordon D’Arcy (58).

The Eagles will also miss full back Chris Wyles, who has not fully recovered from an ankle injury.

Things are more settled in the Ireland camp, with coach Kidney naming Tom Court as replacement for injured prop Cian Healy, and Geordan Murphy at full back in place of Rob Kearney.

O’Gara, Denis Leamy and Andrew Trimble will start on the bench, while there is no place in the squad for flanker Sean O’Brien, rested as a precaution following his return from a knee injury.