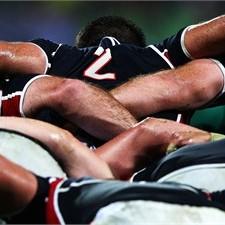 USA’s scrum was overpowered by Ireland in the Americans' opening match on Sunday, but O’Sullivan refused to blame Thiel or Pittman for the 22-10 defeat, saying the pack needed the fresh legs to compensate for a four-day turnaround.

“We were cut up a bit on Sunday by the Irish pack,” he said. “A bit of it was inexperience.

We got crowded at the mark which didn’t suit us.

"Ireland were a bigger pack and we needed a bit of space to engage to give us a small bit of momentum.

“The biggest thing is that they (Biller and Moeakiola) are going to be pretty fresh. Our starting front row changes all the time because there’s not much between the guys. Our hookers are guys we can flip in and out.”

Set pieces are expected to be a major battlefield at Stadium Taranaki in a Pool C match being billed as the 'clash of the superpowers', and both sides regard the encounter as their best chance of a win at Rugby World Cup 2011.

The Eagles' forward pack are formidable defenders, but O’Sullivan knows their scrummaging must improve.

“Russia will be a challenge,” said the Irishman. “We played them in the Churchill Cup this year and they have a strong scrummaging pack. So it’s going to be a challenge for us to batten down the hatches there.

“We need to get back on the horse and make sure we can at least break even at the set piece. Like any game of rugby, if your set piece creaks, it’s going to be a tough battle for 80 minutes.”

The Eagles were unscathed by their physical battle with Ireland and will be at optimum strength against Russia.

Chris Wyles returns from injury to reclaim his place at full back, forcing Blaine Scully to the bench, while there is no place in the 22-man squad for wing Colin Hawley.