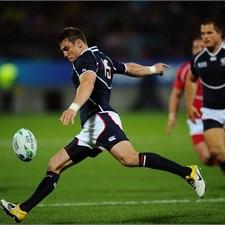 Chris Wyles scored a penalty goal in the first half against Russia CREDIT: Rugby World Cup 2011

USA led Russia 10-3 at half time in a Pool C match at the Stadium Taranaki on Thursday.

The Russians were on the attack straight away and took the early lead when Yury Kushnarev slotted a handy penalty in the third minute for a 3-0 lead.

The Americans, on the back foot early on, got back into the match and on 12 minutes Chris Wyles kicked an equalising penalty goal.

At this stage there was much enterprising play, with both teams making probes into the other's territory.

USA scored the first try in the 19th minute, when scrum half Mike Petri got on the end of a slick

American backline move to score near the posts, and Roland Suniula converted for a 10-3 lead.

Myles failed to increase the USA lead when he missed a kickable penalty in the 30th minute.