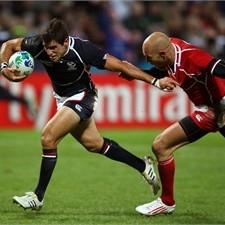 Mike Petri races to the line for the only try in USA's victory over Russia CREDIT: Rugby World Cup 2011

Russia were outclassed by USA on their Rugby World Cup debut, losing 13-6 on Thursday in the lowest-scoring World Cup match since Australia beat England 12-6 in the 1991 final.
USA coach Eddie O’Sullivan was delighted with the victory, which came in freezing rain at Stadium Taranaki.

"It was a great victory for us,” he said after a match that had been billed as 'the clash of the superpowers'. “I thought it was a good match in these conditions."

"As a coach I couldn't have asked for more. I couldn't be more proud of these boys."

Dogged defence and some wayward goal kicking by the Eagles' Chris Wyles earned the Bears a bonus point in the end, and USA captain Todd Clever paid tribute to his opponents’ resilience.

“I was very nervous at the end but they are a tough, tough team,” he said.

“They are improving every time we play them and are getting better and better."

The USA have played Russia four times now, winning this and the previous match at the Churchill Cup in June by just seven points.

After being pushed around by Ireland last week, the USA forward pack were impressive at set pieces, winning five lineouts against the throw and holding their own against the Russian scrum.

"We were focused on starting well early,” said O’Sullivan. “We got some crucial lineout ball and we stole some of their lineout ball, which gave us momentum from the start."

That momentum allowed the Eagles to throw the ball wide early and often, and slick backline work paid off in the 19th minute when Roland Suniula linked with his brother Andrew to send scrum half Mike Petri scampering away to score under the posts.

The USA continued to dominate possession for the remainder of the half, but were frustrated by a combination of the slippery conditions and Russian defence.

“We didn't use our opportunities. Unfortunately, the lineouts didn't function but the team have come a long way to be competing right until the end of the game."

After spending most of the first half pinned in their own 22, the Bears hit back in the second half but full back Igor Klyuchnikov said they were let down by handling errors

"We had problems at set pieces, in scrums and lineouts,” he said.

“We didn't have the ball fast, therefore we committed many mistakes in the backline. We played a flat ball and were always under pressure without being able to coordinate well."

The pressure was ratcheted up in the final 10 minutes as Russia pressed hard for a try to get them back into the match, but the USA held firm.

The seven-point margin could have been greater if full back Wyles had converted more than two of his five penalty attempts, while Yury Kushnarev also squandered three similar opportunities for the Bears.

It was the Eagles’ third Rugby World Cup victory, following wins against Japan in 1987 and 2003, while the Bears will probably have to wait at least another four years to record their first win - they face Italy, Australia and Ireland in their remaining Pool C matches.