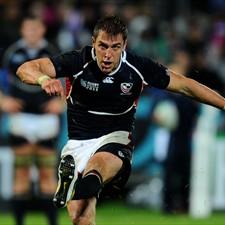 USA full back Chris Wyles says his side is not yet finished at RWC 2011 CREDIT: Rugby World Cup 2011

There were probably more sore heads than legs on Friday as USA reflected on a night to remember.

After their eagerly sought 13-6 victory over Russia at Stadium Taranaki on Thursday in Pool C, there was plenty to celebrate and savour.

It was just their third win in their Rugby World Cup history and full back Chris Wyles admitted at his side's recovery session: “There’s a few hangovers. You can probably see it in my eyes.

“But I do feel pretty amazing, actually. It’s great to get a victory in a World Cup. It’s a fantastic feeling and there’s a great atmosphere among the squad.”

Scrum half Mike Petri, who scored the only try, said the victory was even more satisfying as the Eagles had planned meticulously for the showdown with Russia for more than a year.

“When you look at our pool, realistically this was the game we had to win,” he said.

“This was the game we had to target and go after really hard - and we did, so credit to our boys.”

Petri’s try was the high point of an unforgettable night that was built on set-piece dominance, ferocious defending and a backline strengthened by Wyles’ return from injury.
Victory over the Bears and a strong showing against Ireland means the Eagles have already exceeded expectations, but Wyles insists they are not finished just yet.

“We go into every game thinking we can beat any team,” Wyles said. “That’s the attitude we have. If you don’t have that attitude then you’re doing yourselves a disservice.

“We’re not going to try to change our tactics if something’s going well. We’ve got good guys in the back three, we’ve got strong runners in the centres and we want to utilise those guys in attack.”

The Eagles enjoy an eight-day break before facing Australia at Wellington Regional Stadium on 23 September and they came out of Thursday's game injury free.

Captain Todd Clever told fans: “I’m a bit sore, but everything feels much better after a win.”