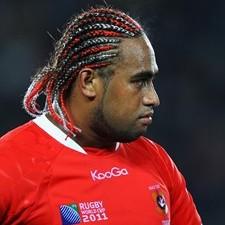 “When I was young, I was sitting where you are now," said Tonga scrum half Taniela Moa to an audience of transfixed school children. "Former All Black Michael Jones came to talk to us and that inspired me to play rugby.”

With these words, during a visit to Paihia Primary School in the Bay of Islands, the Rugby World Cup 2011 player may just have inspired a new generation of youngsters to reach for the sky.

The small school of 170 pupils aged five to 13 hosted five Tonga players. They were greeted with a whakatau, a welcome song, before returning to use the school’s field for rugby practice later in the day.

“It’s all part of the routine, it’s how we do things here. We’re ready to welcome anyone," said principal David Rogers.

However, this was regarded by the school as a particularly special visit. “Are the kids excited? Very, very excited,” he said.

One girl in particular was more excited than most. Sekola Fonua, one of only two students of Tongan descent in the school along with sibling Kinikini, was celebrating her 11th birthday. While the majority of the school supports the All Blacks, her response to who was her favourite team was simple: “Tonga”.

The players dispersed individually to various classrooms to sign shirts, answer questions and mingle with the youngsters.

Moa said it is important to have children involved in rugby from a young age. "This is the difference between rugby in New Zealand and Tonga,” he said. “They start playing so young, whereas we don't start really learning about rugby until we are about 18.”

Moa grew up in Tonga with a ball-less version of rugby, stick rugby. “The stick was the ball and when it breaks whoever has the biggest piece has the ball,” he said.

His family moved to the Auckland suburb of Onehunga 16 years ago, seeking a better life. “I guess it turned out pretty good,” he said.

Thomas Palu, also a scrum half, displayed a positive attitude when a student asked how he felt about his team’s losses.

“It’s hard to be happy when you’re losing, but it’s an opportunity. We play rugby every week, so we can always improve for the next time,” he said.

Palu had a special affinity with the children, saying, “This is what I want to do after I finish playing rugby, be a teacher and help with kids.”

Palu’s family also moved to New Zealand when he was younger, settling in Wellington.

He was intent on leaving a legacy for the Paihia students in the form of an uplifting message. “I just tell the kids to dream big, chase their dreams. There’s no limit to what you can do. ”