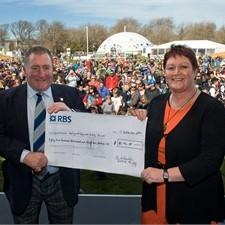 Scotland cheque in on Christchurch

Scottish Rugby Union representatives visited Christchurch on Saturday to show their support for the earthquake-damaged city where they had been due to play a RWC 2011 pool match.

Former Scotland international McLauchlan was greeted by Christchurch deputy mayor Ngaire Button and then presented him with a cheque for just over 85,000 New Zealand dollars for the Christchurch Earthquake Mayoral Relief Fund raised through the Hearts and Balls charitable trust in Scotland.

Button was a grateful recipient on behalf of the Christchurch public and thanked McLauchlan for the generosity and the visit.

"The earthquake was the earthquake," Button said. "But the heart of rugby is still here. The fact that you've come and visited us means a great deal."

Scotland were originally scheduled to meet Argentina in their Pool B match at the city's Stadium Christchurch, but the match was relocated to Wellington after the stadium suffered structural and pitch damage during February's earthquake.

Townsend, who visited the stadium on a planning visit just before its new 60 million New Zealand dollar stand was opened last year, lamented its loss.

"It would have been cracking," he said. "Home of one of the best club teams in the world, really knowledgable rugby people, it would have been a great venue. We were desperately disappointed for the people and for ourselves."

The Scotland contingent also visited the Cowles Stadium fanzone in the city's badly affected eastern suburbs, where Kellock and Murray led local children in some coaching drills before signing autographs and posing for photographs.

The final leg of their Christchurch visit was a trip to the city's Ronald McDonald House, a charitable organisation that provides accommodation for the parents of sick children attending the nearby Christchurch hospital.

Almost half of the building's 26 rooms are being refurbished after suffering earthquake damage, but the hospital still provides a valuable service for parents, many of whom were happy to meet the Scotland representatives, who talked rugby and signed shirts, pictures and books.

The group ended the day by returning to their Wellington base to prepare for their third Pool B match against Argentina on Sunday, 25 September.