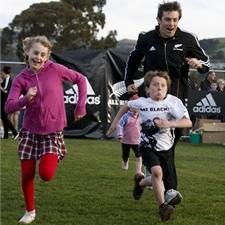 All Blacks a hit on return to Christchurch

The All Blacks helped put the smiles back on the people of Christchurch on Sunday as thousands of fans made their way to the city's Centennial Park to welcome the players they hope will lift the Webb Ellis Cup.

A cold wind did little to diminish the enthusiasm of supporters from one of New Zealand's most ardent rugby-supporting communities as they cheered the introduction of the All Blacks, with Canterbury favourites Sonny Bill Williams, Dan Carter and captain Richie McCaw receiving the loudest greetings.

McCaw, captain of the city's Crusaders Super Rugby team and the face of the RWC Christchurch Appeal, acknowledged the difficulties Christchurch residents have faced since the deadly earthquake in February.

"You see things on the TV, but until you come here and look ... I think the guys have been blown away by the things people have had to put up with here," McCaw said. "Thanks for coming out to support us, we really appreciate it."

Number 8 Victor Vito echoed his skipper's words about the importance of the All Blacks' visit to Christchurch. "When you come here and see people's faces, it's nice to be able to put a smile on them," he said.

Fans clutched shirts, flags and posters to be autographed as players talked rugby with parents and found their best smiles for hundreds of photos with the kids.

One of the lucky locals picked from the crowd to ask a question was nine-year-old Liam Pratt, from Hoon Hay, the suburb where Centennial Park is located.

His poser about toughest opponents left McCaw temporarily struggling for an answer before he revealed that former Wallabies flanker George Smith was "always pretty tough to play against".

Liam, who plays centre or flanker for the Sydenham Rugby Club, said he was a bit nervous asking the All Blacks skipper a question, but it was "cool" to have the All Blacks visit a park in the middle of his neighbourhood.

"We didn't have to go to a stadium like Rugby Park or something," Liam said. "It was very cool to have them right here."

The All Blacks are spending a few days training in Christchurch before heading to Auckland on Wednesday ahead of their crucial Pool A match against France on Saturday at Eden Park.

For more information or to donate to the RWC Christchurch Appeal, visit www.rwcchristchurchappeal.com.