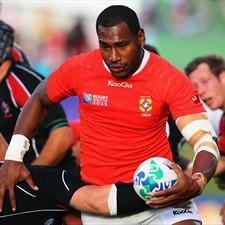 You need only look at centre Alipate Fatafehi to see the positive impact conditioning coach Matt Blair has had on the Tonga squad.

Their overall fitness has improved noticeably since the New Zealander joined the team eight weeks ago.

And the Sea Eagles will need every physical advantage they can muster against the fleet-footed Japanese in their Pool A clash at the Northland Events Centre on Wednesday.

Fatafehi, who plays for CA Saint-Étienne in France, has dropped from 125kg to 115kg, and attributes his sleeker self to extra running and diet changes.

“I’ve done a lot of running and looking after what I’ve been eating,” he said.

“Especially my favourite, KFC, I’m not eating it any more. When I was in Lyon I’d eat it every week and the food in France is quite rich. Maybe that is why my body weight went up so much.”

While Fatafehi has missed his chicken thighs, wicked wings, chips and coleslaw, the benefits have been worth his sacrifice.

“I feel faster and stronger,” he said. “I’ve definitely lost weight and gained speed.”
Blair says the players' biggest challenge has been to improve their aerobic endurance.

“Some say it’s genetic, that Tongans are predisposed to more high-intensity strength power. They are very strong and powerful”, he said. “But while their anaerobic ability is good, aerobically they tend to struggle a bit.”

Blair has tried to rectify this by drilling members in high-intensity running, power and strength work, body balancing and flexibility.

The results were evident in the second half against the All Blacks when Tonga finished strongly to score seven points.

“They are outstanding guys to work with from a coaching and training point of view,” Blair said. “They are one of the best groups I’ve worked with in terms of commitment and how they get into things. I can’t say enough good things about them.”

Speed is expected to be a key factor when Tonga play the fast and furious Japan side, as it was in their 25-20 defeat by Canada last Wednesday. The Tonga team had the size but could not match the pace of the Canucks.

“They are quite big guys, they have a large amount of weight to carry," said Blair. "You look at the Canadians. They were smaller men but they were tearing everywhere, all over the place.”

Nevertheless, the team have proved they can go the distance, he added.

“They proved against the All Blacks they can play an 80-minute game. They were fighting right to the end.”