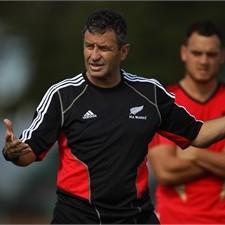 All Blacks learn their lessons

New Zealand will call on the bitter experience of past defeats to drive them over their biggest hurdle so far in the Rugby World Cup at Eden Park on Saturday.

France, their Pool A opponents and the masters of unpredictability, have twice upstaged the All Blacks during the knockout stages of the tournament, winning 43-31 in 1999 and 20-18 four years ago.

This time, however, New Zealand's assistant coach Wayne Smith says no stone has been left unturned as they bid to keep their RWC momentum on track.

"As a (coaching) group we decided pre-World Cup to look at why we failed in the past," Smith said. "We've tried to go towards that rather than run away from it.

"I think probably in the past we've just ignored it, said, 'This is a new tournament', and we haven't learned the lessons."

Smith had a ringside seat for France's quarter-final victory in Cardiff at RWC 2007 that represented New Zealand's worst performance in the tournament - and he doesn't want to repeat the agony on home soil.

Smith said that, while France's tough 46-19 victory over Canada in Napier on Sunday had not shown him anything new in terms of analysing the French style, he was quietly confident in his side's preparations for Saturday's game.

"We all studied them through the Six Nations and pre-World Cup games," Smith said. "We have a pretty good feel for what their patterns are. You might have some individuals bringing different strengths and abilities to the set-up, but generally the patterns stay."

Smith is still expecting a tough, physical contest in one of the most eagerly-awaited matches so far in the tournament.

"The World Cup is different to normal Tests," Smith added. "The level of intensity goes up. I'm certain they want to knock us over, because, psychologically, it's important for the team - and we want to do the same.

"We've got to really get an edge. We've been watching all the other teams play and the physicality was way up, so we've got to get that really quickly."

Scrum half Jimmy Cowan is also happy with his side's preparation, although he is worried about what surprises France may have up their sleeve.

"We'll have a structure in place this week and get a general sense of what they do from their set-piece stuff," Cowan said. "But you can't plan too much - you've got to expect the unexpected with the French."

It hasn't been all that bad against the French, though. The last time the All Blacks played a RWC match against Les Bleus at Eden Park, in 1987, they secured a 29-9 victory - and the Webb Ellis Cup.

A similar outcome may give them the confidence to go all the way this time round, too.