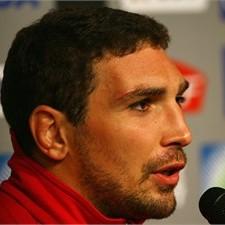 After a 15-6 defeat to Scotland and a competitive match against England where the 41-10 scoreline did not reflect their endeavour, head coach Richie Dixon is confident Georgian rugby is at least showing its potential.

"We gained a lot of respect from the people we played against and the people who were watching us around the world," said Dixon after watching his team dominate large periods of the Pool B clash with England on Sunday.

The first-half statistics were telling for the Georgians: 75 per cent territory, 56 per cent possession and a penalty count 11-3 in their favour. But a shaky kicking display from fly half Merab Kvirikashvili let England off the hook and undermined Georgia's dominance.

Dixon is too modest to accept much credit for the increased competitiveness and is just happy to play his part in the evolution of Georgian rugby.

That evolution gained momentum with the Lelos' performances at Rugby World Cup 2007, where they recorded their first RWC victory, a crushing 30-0 victory over Namibia in Lens.

Significant development funding from the IRB's Strategic Investment Programme, as well as unprecedented financial support from the Georgian government, has helped turn rugby into the country's national sport.

One of the driving forces behind the change is Georgian Rugby Union president George Nijaradze, who was elected in February 2008 and happily describes Georgian rugby as a big family.

Just as comfortable in a suit and shaking hands with International Rugby Board Chairman Bernard Lapasset, or kicking the ball around the training field in a pair of shorts, Nijaradze picked up Georgia's momentum from RWC 2007 and has written a new chapter in the country's rugby history.

"To have ambition to be among the best 12 (teams in the world), you have to follow the level of the first 12, not only on the pitch but in everything that is around the pitch," said Nijaradze. "We have a lot of big-hearted men who spend their lives in rugby but unfortunately this is not enough, we need much more."

As such, he has been happy to delegate a lot of the specialist work required to a team of hired hands, led by former Scotland head coach Dixon. He was already advising Nijaradze on behalf of the IRB before accepting the Lelos' top job late last year.

Dixon's team includes a specialist attack coach in Don Caskie, as well as Australia's John Muggleton, who was the defensive mastermind behind the Wallabies' RWC 1999 triumph when they conceded only one try in six RWC matches.

Investment and coaching have improved Georgia's playing standards, but it is exposure to strong competition that drives the progress.

This is a point 62-cap veteran second row Ilia Zedginidze made after the defeat by England.

"We need many more games like this to perform better," he said, happy to take the positives from Georgia's performance.

Nijaradze agrees. "Our common problem is a lack of serious matches against serious opposition," he says.

To illustrate the point, since RWC 2007, Georgia have lost just one match from 21 in the first division of the European Nations Cup, the level immediately below the Six Nations.
Nijaradze and Dixon both feel it is time for Georgia and other lower-tier nations to be given shots at the bigger teams to assist their development.

"You have to be very realistic when you are talking about things like this, but I think there is an alternative," said Nijaradze. "A European championship, once per two years when all of us get a chance to play each other. If we play a respectable game (at RWC 2011), we can influence that."

Such a vision would be a crucial step in the competitiveness of teams such as Georgia, but the development of Georgian rugby is not dependent on the notion.

At the domestic level, two divisions of eight teams create a playing pool of more than 700, but as a result of investment and the establishment of playing and training structures and resources, the number of players in the 6-12 and 16-20 age groups have doubled.

“The Rugby World Cup is right now, but we are already thinking of 2015," said Dixon.

"About 90 per cent of the players at this Rugby World Cup will be available for 2015, so we are starting to get that kind of continuity that other teams enjoy, but it’s taken a little while.”

Georgia still have two RWC 2011 matches to add to their tally of victories and whatever happens, Nijaradze says he is proud of his players because he feels their gutsy performances make the nation proud.