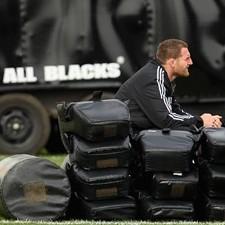 Kieran Read hopes his spell on the sidelines will soon be over CREDIT: Rugby World Cup 2011

Read confident of being fit for Pool A finale

All Blacks number 8 Kieran Read says he is fed up with watching the action from the sidelines and is keen to put the injury frustration that has kept him out of Rugby World Cup 2011 behind him.

The 25-year-old Canterbury back row said on Tuesday that while he was still not 100 per cent fit, the rehab work on his left ankle was going to plan and he was on course to face Canada in the All Blacks' final Pool A match on Sunday, 2 October.

"It's coming on really well," said an enthusiastic Read after training. "I had a good session today, running on it and doing a bit of scrum work. It's just about getting some load back through it."

Read, who made his All Blacks debut a month after RWC 2007, has been nursing the injury since New Zealand's 25-20 Tri Nations loss to Australia in August and it had threatened to rule him out of playing in his first RWC.

Like many sportsmen, Read says he is not good at being on the sidelines. "It's never easy watching games, let alone watching training. I just want to get out on the field."

Seeing his teammates in action at their 'home' World Cup has added to Read's frustration.

"It's awesome seeing how the country has got behind the boys," said Read. "The way we've been playing, I just want to get out there and try to make a difference."

Read says he is slowly working up to full pace in his rehab work but he is already doing some easy lateral stepping exercises, which will increase in intensity as he makes progress.

"It's all pointing towards being right," said Read. "We're working this week to try and get it right so come next week I can train a full week. You never know until you get to that point but it's feeling great at the moment."

He also said being injured had given him the chance to look at things from a coaching perspective and he had tried to help other squad members as much as possible.

New Zealand's other big injury worry, fly half Dan Carter, took a limited part in training, and scrum half Andy Ellis said Carter keeps giving the thumbs up when he asks him how he is doing.

"He was sort of in and out running the show, but not getting involved fully," said Ellis. "He's just keeping an eye on things making sure he's going to be 100 (per cent) for the weekend."

New Zealand are scheduled on Thursday morning to name their team to face France at Eden Park on Saturday night.