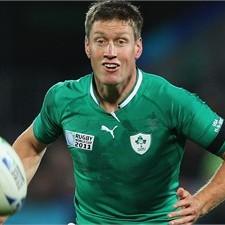 Ireland veteran Ronan O'Gara has played down speculation he will retire at the end of his country's Rugby World Cup 2011 campaign.

The 34-year-old Munster fly half, who came off the bench on Saturday to kick two late penalties in the 15-6 Pool C win over Tri Nations champion Australia, was close to tears after the momentous victory.

"It's massive; this is it for us. I'm done with Ireland in a few weeks," he told a television interviewer.

But O'Gara, who has 113 caps and is playing in his third World Cup, said on Wednesday that his comments did not necessarily signal the end of an illustrious career.

"Playing for my country means so much to me," he told reporters at the team hotel in Taupo. "I said I'd be done with Ireland in a few weeks and there's different interpretations to that.

"From my point of view, when you set goals as a professional rugby player, I think everything ends hopefully at the World Cup final and that's exactly where I stand at the minute.

Passion for the fight

"It's important for me to put an end to that (speculation) because it's a distraction the team doesn't need. In my own head, I'll reassess at the end of the World Cup."

O'Gara admitted he had contemplated retirement "plenty of times" over the past two years but said he wasn't sure when he would call it a day.

"I'm a fighter and I'll keep going to the end. When that is, I'm not sure.

"But when you set goals for yourself, it always ends with a World Cup. It's about being part of an Ireland team that hopefully will do itself justice in this competition.

"Playing for Ireland means so much. You don't walk away from that until it's right and you take advice from people you respect. I'm not at that stage."

O'Gara, who has been vying with Leinster's Jonathan Sexton for Ireland's No.10 jersey over the past two seasons, said his team's victory over the Wallabies was due in large part to their passion for the fight.

"I think Irish teams are always at their best when they're full of emotion,' said the USA-born star, who has scored more than 1,000 international points.

"You can't go up to the well every week in rugby or else you'd be drained. Mentally, it takes huge amounts out of you.

"We were at the right pitch physically and mentally the other night and you saw how we could play."

Ireland coach Declan Kidney is expected to include O'Gara and full back Rob Kearney on Friday when he announces his starting XV for Sunday's match against Russia in Rotorua.

"On paper you probably would expect it to be our easiest pool match," said Kearney.

"As the World Cup has shown, these lesser teams are getting better and there are going to be more and more upsets.

"If you don't come out of the blocks in the first 20 minutes and have a strong start, you give these other opponents hope and they get into the game more. We need to be fully on our game."