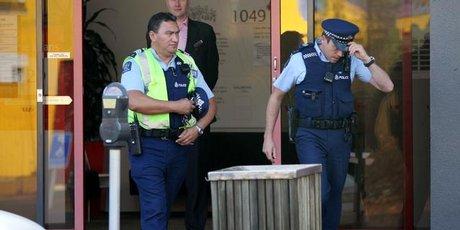 Let's rob another bank – a strange case of deja vu:

Last week, the Dominion Post reported the sad case of Mr Craig Andrew Blair who robbed a bank in Rotorua - not for financial gain but so that he would be sent back to prison. He went into the bank, approached the teller with a note demanding money and said he had a gun in his bag. After being handed $1,140, Blair walked 400 metres to the Rotorua Police Station to give himself up. No weapon was found.

At sentencing, his lawyer told the Court that Mr Blair couldn't cope living on the outside. He had no support and spent the money he was given on leaving prison (usually $350) on alcohol. The probation report said Blair had psychological problems and suffered from depression. Not surprisingly, the report also said he was unmotivated – generally one of the main symptoms of depression. The judge sentenced him to two years and nine months jail.

This robbery was almost identical to another committed by Blair three years earlier. In 2008, he also robbed a bank in Te Puke in order to get himself returned to jail. According to the summary of facts in that case, Blair entered the bank carrying a backpack. He took a deposit slip and wrote on the back of it: "I've got a gun in the bag. Give me the $ or I'll kill you." The teller handed over $650. Putting the money in his backpack, Blair left the bank, walked about 20 metres away and sat down on a park bench until the police arrived to arrest him.

On that occasion, the judge also ignored probation and psychological reports indicating he needed help and sentenced him to 2½ years in prison. It’s now 2011 - deja vu.

The lack of rehab in prison
Mr Blair clearly has significant psychological problems. He suffers from depression and has a drinking problem. He knows how to cope in prison but lacks the skills and the support to cope on the outside. It's a sad and pathetic case. But the real tragedy is the extraordinary lack of rehabilitative support offered by the Corrections Department to assist offenders with mental health and substance abuse disorders – either in prison or on release.

It’s not known if Mr Blair attended substance abuse treatment in prison – but probably not. Less than 5% of the 20,000 people who end up in prison each year are able to attend. Even if he had attended, this would not have helped if his underlying depression and lack of coping skills were not addressed at the same time. 'Best practice' requires patients with co-existing mental health and substance abuse disorders to receive integrated treatment for both disorders.

The lack of support on release
Blair has now been released into the community twice without support, adding to his fragile state of mind. New Zealand has only two halfway houses funded by the Corrections Department and less than 1% of inmates are released into them (compared with 60% in Canada). At the very least, he should have been released into a residential treatment programme - not left to roam the streets and drink himself into a stupor.

This case is an indictment of the judicial system as well as of Corrections. Two different judges ignored psychological reports and sent this sad and depressed individual into a prison system which is incapable of assisting people with complex psychological problems. By the time he finishes his current stint, he will have been in prison for at least five years - at $90,000 a year. This will end up costing the taxpayer at least $450,000.
Compare that with Prozac - which costs about five cents a day. Or two months in rehab - which costs about $6,000. Society is no safer because Craig Blair is in prison. When he offends, he doesn't hurt anyone. And when he gets out, he'll just do it again.

Time for an inquiry
Keeping people in prison, failing to treat the causes of the offending and releasing them without support, destroys lives and is a waste of financial resources. When the Government is facing the biggest deficit in its history, its time New Zealand re-assessed this deceitful strategy. In 2008 Simon Power called for an inquiry into the availability of rehabilitation in the justice system. Then he became the Minister of Justice and didn’t want one. Still more deceit. Labour MP Rick Barker has also called for in inquiry into recidivism calling it an 'intractable problem'. It's high time an inquiry took place.

In the meantime, Wellington based alcohol and drug counsellor, Roger Brooking, has done his own: Flying Blind - How the justice perpetuates crime and the Corrections Department fails to correct.