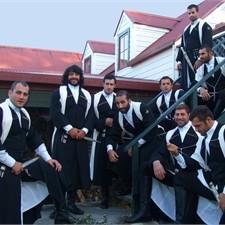 It's not every day that the president of a national rugby union swaps his team tie for an apron and a pair of tongs.

Yet that's exactly what George Nijaradze, head of the Georgian Rugby Union, was doing on Wednesday while sipping a glass of his country's red wine and enjoying the sun at Gladstone Vineyard.

While he chatted with Wairarapa locals, his team milled about dressed in chokha, the men's national costume. The 30-man squad were debonair in their long black coats adorned with contrasting white shoulder pieces.

Dressed in their chokha as part of the team's traditional banquet to thank their hosts, the Lelos looked just as comfortable in their traditional costume and black leather boots as they do in their rugby kit.

"Please, have something to eat," insisted team captain Irakli Abuseridze as he ushered their New Zealand guests to a table laden with Georgian dishes, all prepared by the union president.

There were murmurs of approval from guests about the lamb chanakh stew, the beetroot pkhali, the lamb chakapuli stew with tarragon, and the Georgian cheese bread.

"The spices come from Georgia," explained the Lelos' administrative assistant Natalie Kurtanidze. "The president (Nijaradze) prepared it all himself."

As Nijaradze ferried plates of spiced, grilled lamb chops across the courtyard, he urged the crowd to dig in before the Lelos - whose 30-man collective weighs a total of 2,947kg, the lightest of all RWC 2011 teams - ate their fill of Georgian lamb stew.

"At the last Rugby World Cup, the president made a large meal for the players," said Kurtanidze. "They loved it, I think it's because they missed home."

After the last of the dishes were cleared, the team assembled to serenade the crowd with a rendition of O Sole Mio, followed by the traditional Georgian song, Chemo Kargo Kvekana.

The Lelos, who are based in Masterton until their third Pool B match against Romania at Palmerston North on Wednesday, 28 September, basked in the limelight and the day's sunlight.

"If we can give them just a small feeling of what it's like in Georgia - through our food, through our wine, through our music - than we are very happy," said Nijaradze.

Others were just happy to be in the sun after several days of rain across New Zealand.

"We don't need sunshine in New Zealand because your warm welcome is our sunshine," said the team's media manager Lasha Khurtsidze.