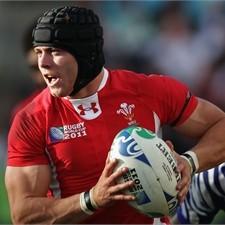 Wales' Halfpenny is the full shilling

Wales' Leigh Halfpenny is a small man playing a big man's game, but he would not have it any other way.

The 22-year-old stands only 178cm tall - about the size of a scrum half - but he believes his diminutive stature is no obstacle on a rugby pitch.

"I don't see height as a problem," he said. "It does mean I have got to work on my jumping and leg power to jump over the big guys. But as long as I work hard on my skill level, I am fine."

Halfpenny has played as a wing for most of his senior career, but his first love is full back, the position he mostly played as a junior.

"It's nice to play both positions, but I see myself as a back-three player, rather than an out-and-out wing," he said.

"I've only played full back at international level twice - for 20 minutes against Argentina and a half against Samoa. But I've felt really comfortable (on both occasions)," he said.

Halfpenny's path to Rugby World Cup 2011 has been far from easy. He has had a wretched run of injuries over recent years.

His international dreams were shattered in 2009 when he was sent home early from the British Lions' tour of South Africa because of a recurring thigh injury.

He then missed three of Wales' matches in this year's Six Nations tournament with a serious ankle injury and his World Cup aspirations were almost derailed in June when he had a titanium pin inserted in a broken foot.

It would have been easy for Halfpenny to give up after a badly disrupted domestic season with the Cardiff Blues.

But his persistence has been highly praised by the Wales team management.

"I couldn't be happier for him," said defensive coach Shaun Edwards.

"He's had some horrific injuries and had rehab after rehab. That can really break your spirit. But he's been super dedicated."

There were days when his grandfather would pick him up, the wind would be blowing, the rain would be cold, and Leigh would say, "Grandad, I'm a bit tired today".

Malcolm would reply with, "no you are not. The training will do you good."

Halfpenny is relieved to be back playing the sport he loves and is soaking up the World Cup experience.

"It's awesome to be here. Four months ago, I thought I wouldn't be playing in the World Cup," he said.

"I had a hard pre-season and now I've got a massive chance. It was so good hopping on that plane."

Halfpenny made a huge impact when he came on as a replacement for injured full back James Hook against Samoa on Sunday. He set-up Wales' winning second-half try with a breathtaking run down the left touchline.

"He is one of our most improved players over the past 15 months," said Wales assistant coach Robert Howley.

"You could see on Sunday that he just adds that extra ingredient. When he came on, his counter attack led to that try."

The nuggety back made full use of his small stature, dodging a few desperate Samoan defenders before his scintillating sprint.

"It was nice to duck under a few tackles," he said.

But even more satisfying was the opportunity to represent his country again.

"I was chuffed. It was great to come on at half time and to do a good job was pleasing," he said.

On Saturday, Wales will announce their team for their next match against Namibia on Monday, and if he is named, Halfpenny will be out to make the most of his chance.

"If I get the opportunity, I want to play to the best of my ability and prove myself. It will be nice to show what I can do," he said.