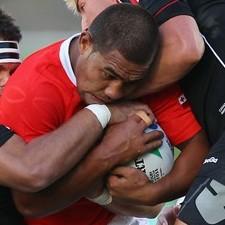 Tonga's Sione Vaiomounga says being at Rugby World Cup 2011 has made him a better player and he hopes the experience will help propel him from island club rugby to a professional career.

The 22-year-old flanker is the only member of the Sea Eagles RWC 2011 squad who plays in Tonga, a country with a rich rugby history.

The first match took place in 1921, the first Test match in 1924 and the country now boasts 6,500 registered rugby players.

But the game in Tonga has comparatively little by way of facilities, and team manager Aminiasi Kefu said none compare with the Kerikeri training ground where the squad worked out on Saturday.

"This is way, way better than our best ground," he said. "Nearly all of the high schools have rugby grounds, but some of the goal posts are barely standing up, some don't have grass, the field is uneven. That's just a reality."

But that has not stopped many Tongan players from learning the game on their home grounds and carving out distinguished professional careers, and Vaiomounga is hoping to follow in their footsteps.

Among this year's Tongan RWC squad, Aleki Lutui, Taufa'ao Filise, Sione Kalamafoni, Vungakoto Lilo, Sukanaivalu Hufanga and Sione Timani were all picked to play for the Ikale Tahi (Sea Eagles) from Tongan local sides before moving on to foreign clubs.

The ambitious Vaiomounga said that playing at the RWC level - he started for Tonga against Canada and Japan and now has nine internationals under his belt - has been a major boost to his confidence.

"I believe that I can play on this level now."

Tonga's final Pool A match is against France on Saturday, 1 October.