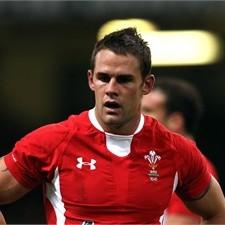 Wales look for feast of tries against Namibia

Wales will be hunting a bonus point victory in their Pool D match against Namibia on Monday, in a match littered with individual milestones.

A bonus point would give Wales the edge in their battle with Samoa to secure second place in Pool D, which could go down to the wire if the islanders manage to beat South Africa on 30 September.

Welsh coach Warren Gatland has cause to be confident: Namibia have conceded at least five tries in all but one of their 14 Rugby World Cup matches, with the exception of Georgia in RWC 2007, when they conceded three tries in a 30-0 defeat.

“It’s not disrespecting Namibia at all but we’ve got to put pressure on ourselves and say we should be good enough to win this game and to win it well,” Gatland said.

“It’s important that we don’t try to rush things, be a little bit patient and controlled in the first 20 or 30 minutes and set a platform to get the bonus point.”

That platform will be built on a powerful forward pack, boosted by the return of prop Gethin Jenkins (77 caps) and blindside flanker Ryan Jones (53 caps), who makes his Rugby World Cup debut after missing the 2007 tournament through injury.

In the backs, Gatland has gambled that young centres Scott Williams (20 years) and Jonathan Davies (23) can reproduce their form for Llanelli Scarlets at international level, while the backline will be anchored by two more Scarlets men in veteran fly half Stephen Jones and scrum half Tavis Knoyle.

The back three of Leigh Halfpenny, Aled Brew and Lee Byrne will all get their first starts at Rugby World Cup 2011, following injuries to wing Shane Williams and full back James Hook.

In total, Gatland made a record 11 changes to the Welsh first XV that beat Samoa 17-10 on 18 September in Hamilton.

Barring a miracle, the Namibians will finish bottom of Pool D and coach Johan Diergaardt is expecting a fierce assault from the Welsh.

“We expect that they will come full out trying to get some points from us,” he said. “Maybe they have got the right to do so after our game against South Africa (which Namibia lost 87-0).

“We need to concentrate for 80 minutes. We cannot play just for 60 minutes and allow seven tries in the last 20 minutes (as against South Africa).”

Thanks to fly half Theuns Kotze’s kicking against Fiji, the Welwitschias have scored more points than Wales thus far in the tournament (38 to 35), although they have also played an extra match and conceded 185 points, more than any other team.

The match also throws up some significant personal milestones.

Stephen Jones will win his 101st test cap for Wales, surpassing Gareth Thomas who finished his career with exactly 100, while Wales’ reserve hooker Ken Owens will win his first cap if he takes the field during the match.

For the Namibians, hooker Hugo Horn will play his 10th Rugby World Cup match, a national record, while fly half Theuns Kotze needs just one more point to move past Lean Van Dyk’s tournament record of 22.