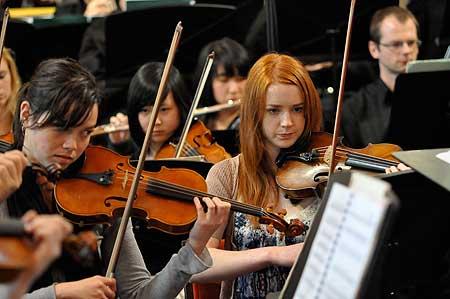 Facing conflict through music is the theme of a poignant contribution to the Real New Zealand Festival being presented by The New Zealand School of Music orchestra in memory of one of history’s darker periods.

In Remembrance: facing conflict through music is a performance of Boris Pigovat’s Holocaust requiem for solo viola and orchestra that is being staged at Wellington Town Hall at 7.30pm on Thursday September 29.

Conducted by Kenneth Young with Professor Donald Maurice as soloist, the performance will take place on the 70th anniversary of the Babi Yar massacre in Kiev, Russia where in 1941 34,000 Jewish civilians were murdered by Nazi forces.

New Zealand School of Music director Elizabeth Hudson says as a response to conflict and trauma music has the power to express what cannot easily be put into words.

The concert also includes Schelomo (Solomon) by Ernest Bloch for solo cello and orchestra, a work written in response to the horrors of World War I. The soloist will be Inbal Megiddo, the New Zealand School of Music’s newly appointed lecturer in cello giving her first major concert here.

The other two works featuring in the programme give a New Zealand context to the theme of facing conflict through music: Anthony Ritchie’s Remember Parihaka responds to the 1881 conflict between Taranaki Maori and British soldiers; and John Psathas’ Luminous is in memory of a friend overwhelmed by the cultural dislocation she experienced immigrating to New Zealand from China.

“The four works in this concert were created in response to four very different situations from the past, but through their performance we will bring them into our present, and remember and honour the victims,” Professor Hudson says. “Regardless of whether whole societies are involved, or a personal tragedy is invoked, music encourages us to share and reflect on our relationship to these histories in a very special way.”

The New Zealand School of Music is jointly run by Massey University and Victoria University.

Tickets for the concert, which will be attended by dignitaries including Israeli ambassador H E Shemi Tzur, can be booked at Ticketek.