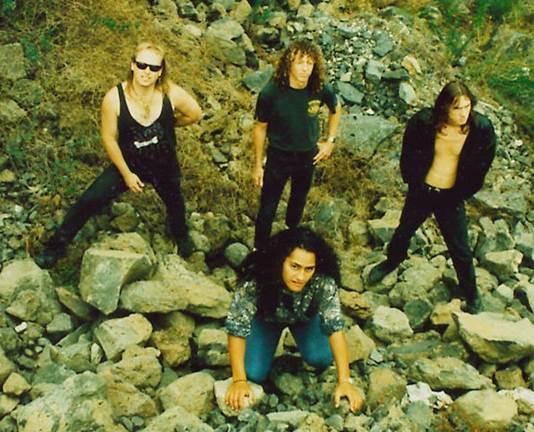 They may have lost the mullets, leather pants, and got hitched somewhere along the way, but after a sixteen year break these blokes are ready to rock once again.

West Auckland band Alienblade have shrugged off the lame factor, and taken the title of most hard-core rockers in The Rock’s Lame to Fame competition.

Announced on Monday afternoon, after six weeks of battling it out on the mics, the West Auckland band have scored themselves the chance to make it big. Top shelf bourbon, white stretch limos, and trashed hotel rooms await the boys on the path to fame.

The band split in ’95 after a series of unfortunate events involving a plate glass window and a disco band. But with all that in the past, and coincidently all within walking distance of each other in West Auckland, the foursome will be taking New Zealand by storm once again, proving that age is no barrier in the world of rock. With a professionally recorded single and airplay on New Zealand’s biggest rock radio station, Alienblade will be well on their way to hitting the big time.

Terry Hollands, lead singer and guitarist of Alienblade, compares the band’s sound to a fusion of ACDC, Nirvana, Weezer, The Killers, and Velvet Revolver.

When they were told on air they had won the opportunity for fame, Terry announced that the band were ready to give this 200%, stating “I’d chop off my arm to make this happen”.

The band will record their first professional single under the guidance of legendary Producer and Songwriter Brian Bell in Auckland City. The Rock’s Robert Taylor said ‘Brian’s worked with a number of famous kiwi rock bands including The Dead Flowers and The Jordan Luck Band, so these boys are in good hands. The key to their fame will be producing a kick ass rock song. We wish them all the best’.

For a sneak preview of fame in the making, check out the boys at their Facebook page - www.facebook.com/pages/Alienblade/190676867645805