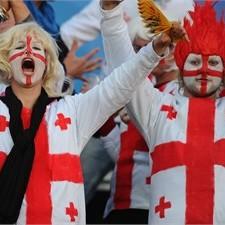 Georgia fans come to the party for the victory over Romania CREDIT: Rugby World Cup 2011

Georgia claimed their first victory of the tournament and condemned Romania to their fourth straight defeat, winning 25-9 in a match dominated by the defences.

The loss consigned the Oaks to bottom place in Pool B after they trailed thoughout a drawn-out exchange of 170 tackles and a single try at Arena Manawatu on Wednesday.

Georgia's openside flanker and man-of-the-match Mamuka Gorgodze was the lone try-scorer, touching down in the 56th minute.

Romania captain Marius Tincu was philosophical about his team's exit from RWC 2011.

The hooker said his side were unable to present a united front against the Georgians.

"We were subjected to a lot of contact," he said. "They really brought the game to us."

The safety-first tactics employed by the European Nations Cup rivals meant both teams preferred to score their points through kicking rather than attempt to ground the ball in their opponents' territory.

Georgia fly-half Merab Kvirikashvili banished all memories of his wayward kicking performance against England by posting 12 points during the first 36 minutes. By the final whistle Kvirikashvili had contributed 17 points to Georgia's winning total of 25.

"The first half was very stressful," he said. "It was a very important match for both teams.

"Sadly the two teams know each other so well they almost forgot to play tonight," he said.

"I was concerned that the match was going to develop into a bun fight and in the first half it almost did."

Romania coach Romeo Gontineac said he was satisfied with his team's efforts but disappointed the Oaks were unable to end their tournament experience with a more attractive performance.

"We showed in the first half we can play good rugby," said Gontineac, also a retired Oaks centre.

"We wanted to win this game and we had a good first half, but Georgia had the second half."

The Romanians leave New Zealand with no RWC 2011 points, while Georgia go into their last Pool B match against Argentina on Sunday with four points.