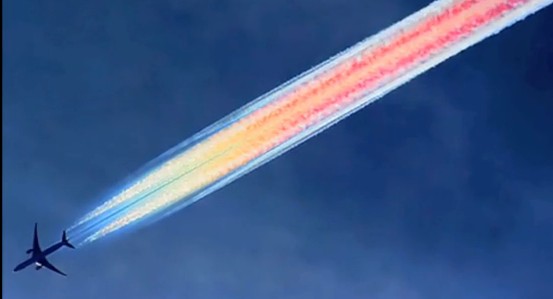 A passenger plane was seen spraying an aerosol over Northland, New Zealand.  Flightradar24.com was used to identify this plane in real time. It was KAL129,a Korean Air plane, that had come from Soeul and was destined for Auckland International airport. This film shows how to identify planes using FlightExplorer.com and the Auckland International Airport Arrival Schedules, also.

According to researcher, Rosalind Peterson, who is the President of the Agriculture Defense Coalition, human health and the environment will suffer as a result of these jet emissions. She spoke about this problem at a UN conference in 2007, where she said: “The geoengineering programs that are now being promoted are only going to release more toxic chemicals and particulates into our atmosphere in the hope that they will, in the short term mitigate climate change. What they will do instead is create a toxic pea soup of chemicals, with unknown, and uncontrollable synergistic effects, that could destroy our ability to produce crops and grow trees. The human costs will be astronomical as rickets, asthma and other respiratory diseases and cancers increase from the use of particulates and toxic chemicals. Just examine the increase in these incidents since the late 1980s when we started to experiment with atmospheric programs on a grand scale, [1].

The New Zealand skies are not clear and blue as they used to be. Photos from around the country posted at ‘Chemtrails over NZ’ at Facebook show that the skies being seen today commonly contain what look like man-made clouds and a white haze.

Aerosols, like that sprayed by KAL129, and other airlines, are being put into our atmosphere without public oversight, hearings or regulations to protect New Zealand’s agriculture, environment and public heath, in spite of the fact that evidence from overseas shows environments and humans are being poisoned by these, as they commonly contain aluminium, among other harmful substances, [2,3].

How on earth can this destructive activity be condoned? It needs to be stopped.

http://www.youtube.com/watch?v=PtlOXhSnNw8
3. Scientific Evidence Regarding the Impacts of Geo-engineering from Frances Mangels
http://chemtrailsnorthnz.wordpress.com/2011/03/06/scientific-evidence-related-to-geo-engineering-from-francis-mangels/

If you record a plane spraying an aerosol and identify it, contact the Civil Aviation Authority of NZ, Airspace and Environment Policy Unit & make a complaint. Ph: 045609445, Fax: 045692024, Email: info@caa.govt.nz.