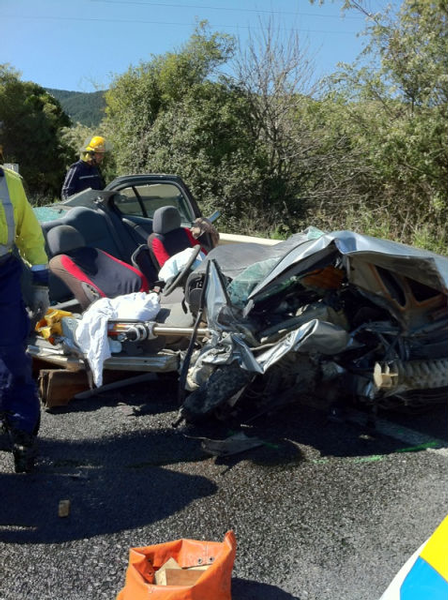 This picture, taken by Dr Chris Lane, who attended the accident, shows the aftermath of the latest fatality on this notorious stretch of State Highway 1. CREDIT: Dog & Lemon Guide

Another needless death on killer highway

Today’s fatal crash on a notorious stretch of State Highway 1 near Paraparaumu could have been easily prevented if wire rope barriers had been installed, says a leading road safety campaigner.

Clive Matthew-Wilson, editor of the car review website dogandlemon.com, was commenting after a head-on collision killed one person and seriously injured another.

“This is another preventable death. A wire rope barrier should have been installed on that stretch of highway five years ago. Instead, the bureaucrats did nothing. They have blood on their hands.”

“These are very dangerous roads, and the cost of the barrier is peanuts compared to the cost of building a new highway.”

Dr Chris Lane, director of the Kapiti Emergency Medical Services, agrees. Over the past 20 years he has attended most of the serious and fatal crashes on State Highway 1 in the Kapiti district. Dr Lane believes that a high number of serious injuries and deaths will continue on the unprotected sections of the highway until median barriers are installed.

“The government should make these wire rope barriers its top priority, far ahead of building new roads that may not be ready for years.”

“Scientific studies show beyond doubt that many head-on collisions are easily preventable.”

“For as long as there have been cars, there have been angry, tired and distracted drivers who tragically die due to a single moment’s inattention. I think that, in 100 years time, children will scarcely believe that, in the 21st century, cars were able to speed past each other in opposite directions at 100km/h, with nothing to stop those vehicles colliding.”

“Using simple, affordable barriers, we can stop common driver mistakes from becoming fatal head-on collisions. Yet the government is canceling the very projects that have been proven to save lives. This is utter madness.”

• The New Zealand Transport Agency recently cancelled plans to install two, one-kilometre wire rope barriers on State Highway 1 between Otaihanga and Waikanae and another between Paekakariki and McKays Crossing, citing lack of funds.