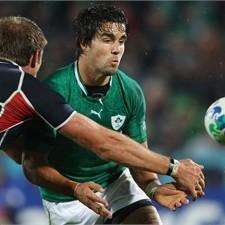 Ireland scrum half Conor Murray is backed by his coach and captain to get the job done CREDIT: Rugby World Cup 2011

Murray trusted to take Irish through

Ireland scrum half Conor Murray will make just his second international start after coach Declan Kidney on Friday placed his faith in the youngster to pull the strings in the winner-takes-all Pool C match against Italy.

The 22-year-old replaces Eoin Reddan for the contest at Otago Stadium on Sunday, in which the loser is virtually guaranteed to exit the competition.

Ireland top Pool C on 14 points, having won all three matches, including a 15-6 victory against group favourites Australia on September 17.

But with Italy and the Wallabies both on 10 points, an Azzurri win could see Ireland out of RWC 2011, with Australia almost certain to beat Russia on Saturday.

"He's new to it but he's dealing with it very well. He's a confident young man and he's shown to be very much in his depth in these surroundings," Ireland captain Brian O'Driscoll said of Munster No.9 Murray, who started against USA before playing 20 minutes against Australia.

"You wouldn't know he's not even had a handful of Test matches under his belt.

"He goes about his business, he's a hard worker and a nice young fella. What's not to like about that?"

Sexton started against Australia before making way for O’Gara, who sealed the win with two penalties and was retained for the match against Russia.

"Ronan has been playing well for us but I don't think I have ever in my life played someone just for their place kicking," Kidney said as he sat alongside O’Driscoll at the team announcement press conference in Dunedin.

"Jonny's a top class out half and place kicker. He's disappointed he's not playing but when he comes on he does his bit."

Second row Paul O’Connell, the British and Irish Lions captain, is selected despite having been troubled by a hamstring strain picked up against Australia.

"He trained this morning, training away there with all the rest of the lads. In tournament rugby it's always going to be like that. The longer the team are in it, the more last-minute decisions," said Kidney.

Kidney made eight personnel changes from the team that beat Russia. Positionally, Keith Earls moves from the centre to the left wing as O’Driscoll and Gordon d'Arcy make their 46th start together in the middle to extend their world record.

O'Driscoll said three victories and the euphoria of the win against Australia had not changed Ireland’s original objectives in Pool C.

"We thought we were capable of beating Australia, but it doesn't make it any different about having to beat Italy on the last day."