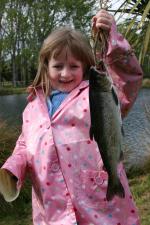 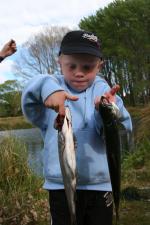 1000 fish to be released for Take A Kid Fishing

This year over 1000 salmon will be released into the Groynes Lakes in Christchurch for the annual Take A Kid Fishing (TAKF) day on October the 16th. This is the most fish that have been released for the event which has been running for over twenty years now. The fish are donated by Lady Isaac with the support of Fish and Game.

Fish and Game Officer Emily Moore said the day was a popular one with Christchurch families and was the first fishing experience for many children. “The Kids Fishing Trust does such a good job with this event - it is really a highlight of the year for many families,” said Moore.

Some rods are available on the morning; although families are encouraged to bring their own if they have them. One of the lakes is specifically for children eight years old and under where an experienced angler is assigned to help each individual child for an allotted time. The event starts at 9am and runs till 1pm. During these hours it is restricted to children 12 years and under. From 1pm until 7pm junior anglers 17 and under may fish the lakes.

Moore said the fish will be released prior to the event to give them a chance to settle in to their new surroundings and work up a bit of an appetite. The lakes will be closed to fishing from the Thursday until the day and they will be hotly guarded by security and rangers.

This year there will also be a Freshwater Fishing Expo on site where people can be meet the various fishing clubs that operate in the region and as well as several fishing stores. Moore said Fish & Game wanted to introduce families to the clubs as they are a great way to get into the sport. Six clubs will be represented at the expo which will run from 11am until 2pm.