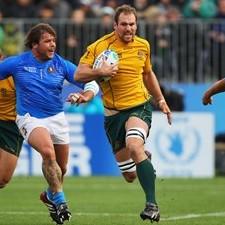 Breakdown will be crucial, says Elsom

Wallaby flanker Rocky Elsom believes the team that wins the breakdown will probably win the match when Australia meet defending champions South Africa in their quarter-final on Sunday.

"Every inch of ascendancy you can gain there at the breakdown is crucial," Elsom said ahead of the showdown at Wellington Regional Stadium.

"Any team that gets the dominance at the breakdown, they're going to provide front-foot ball for their attack and that is an enormous part of the game."

The match will feature two of the game's most ravenous jackals at the breakdown, South Africa's Heinrich Brüssow and Australia's David Pocock, with each striving to get in for the kill before the bulls of the opposing pack arrive to batter them away.

Australia depend on quick ruck ball to ignite their backline and Elsom said they were not the only ones.

"I think if you look at the teams whose attack has really stuttered, you can almost always link it back to the breakdown," he said.

Springboks coach Peter de Villiers believes closing that gate before the Wallabies get loose in the paddock will be one of the keys to shutting down Australia.

"If they get it right, you're in for a long, long day. If you can shut it down, for them it's going to be a nice and equal contest," de Villiers said.

Australia fly half Quade Cooper thrives on the chaos that quick ball can create in opposition defensive systems and is less effective when breakdown ball is slow and the defence well organised and quick off the line.

De Villiers has warned his players not to try to second guess what Cooper is likely to do, but to be patient and respond effectively as required.

"We will get it wrong if we make these decisions for him," said de Villiers. "If we allow him to make it, then it's much easier to stop him. So we'll be ready for that."