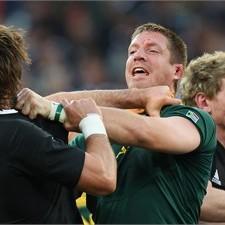 South Africa second row Bakkies Botha is painfully aware that he may end up playing only another 80 minutes in a Springboks shirt.

The 32-year-old hard man is in a group of 2007 World Cup-winning veterans reaching the end of their international careers.

Now the tournament has reached the knockout stages, the next Test match could well be the last for Botha, John Smit, Victor Matfield, Danie Rossouw and Butch James, to name but a few.

"A lot of the guys know it can be their last game and the team that loses this weekend is on their way home, so we know what we must produce," Botha said on Tuesday ahead of the quarter-final clash with Australia on Sunday.

"A handful of us have been around the block for nine, 10 years and the big secret for us is to focus on the weekend. When you pull that green and gold jersey on you must give it all and we are not holding back one inch.

"We know from this weekend the intensity is going to get higher and the pressure as well."
Botha's problems with first an achilles injury and then a hamstring injury have curtailed his involvement in RWC 2011.

"You don't know how frustrating it is. It is all the physical battles I missed against Wales and Samoa. When I was sitting in the stand I just wanted to take off my No.1 jacket (Springbok blazer) and get stuck into it.

"Now I am feeling 100 per cent and must hit the ground running. I am happy to be back. As long as I can give something back to the Springbok team I will be happy if I can make a difference."

Botha's participation on Sunday is still dependent on selection, but he envisages a game suited to his confrontational style.

"Since Robbie Deans took over (as Wallabies coach), the Australia pack of the last two or three years have picked up their physicality a lot, as we saw in the Tri Nations.

"You cannot play Test rugby if you have not got a pack that dominates physically and this weekend's battle will be physical as well. We must get on the pitch, do our best and have a good day at the office.

"Every Test match is a clash of the packs of forwards, where we make a few deals and everything in the rucks, sorting each other out.

"We know that a Test match against Australia is a physical battle and that's the first battle we must win to put our backline on the front foot."

Botha's determination to extend his 76-Test career is not diminished by his plans to play in Europe after the tournament finishes.

"I have signed a three-year deal with Toulon so when the World Cup is over I will go home, pick up my wife and three kids and head to France.

"I am looking forward to it, it is a new challenge for me. But before that I have three more weeks of hard work and I am putting all my energy into that."