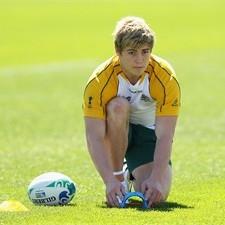 When Wallaby kicker James O’Connor lines up a shot at goal against the Springboks on Sunday there will be one South African hoping he strikes straight and true.

Former Springbok Braam van Straaten signed up as Wallabies kicking coach in August 2010 and has utilised his passion for ball striking to tweak the techniques of the Australian kickers.

"I've been very privileged to work with them a very long time now, just over a year, and they are starting to pick up on the art of kicking, which is the language we are talking about,” van Straaten said.

“They're getting really good at it. Whenever I come into camp it's only the small little subtleties that we work on."

While van Straaten has joined the Australian camp in New Zealand to provide hands-on tutelage, courtesy of technology, most of his work with the Wallaby kickers has been done without him leaving the comfort of his home in George, South Africa.

"We've put up a platform to work anywhere in the world with anybody, which is really great.

They've been sending me their kicking clips on Dartfish TV (a video-sharing website) and I download, analyse and send it back to them,” he said.

"Whenever they've got a question, I share my screen on Skype (a communication application), show them exactly what they need to do and give them certain exercises that will help in getting them nice and solid and compact in their technique.”

The 40-year-old coach, who notched 221 points in his 21 Tests for the Springboks, was eager to dismiss suggestions he would have mixed emotions ahead of Australia’s quarter-final against his home nation.

"There's a certain number of people in New Zealand who say the same about Robbie Deans. It's a professional era. I'm here to do a job. Nothing else matters," he said.

James O’Connor, who kicked nine goals from 10 attempts against Russia in Australia’s last pool match, was quick to credit van Straaten for his success.

“Technically, there’s no one better than Braam. He knows his stuff and it’s his passion, goalkicking. If you could kick all day long, he’d be there with you.”

As for dealing with the difficult kicking conditions presented by the infamous winds of Wellington, van Straaten says the answer is simple.

"If you get the fundamentals right you will get a good strike on it, even in a windy stadium,” he said.

“You will look for good rotation, good penetration in the kick and that will get the ball through the poles."